Posted on October 23, 2016 by newforestcommoner 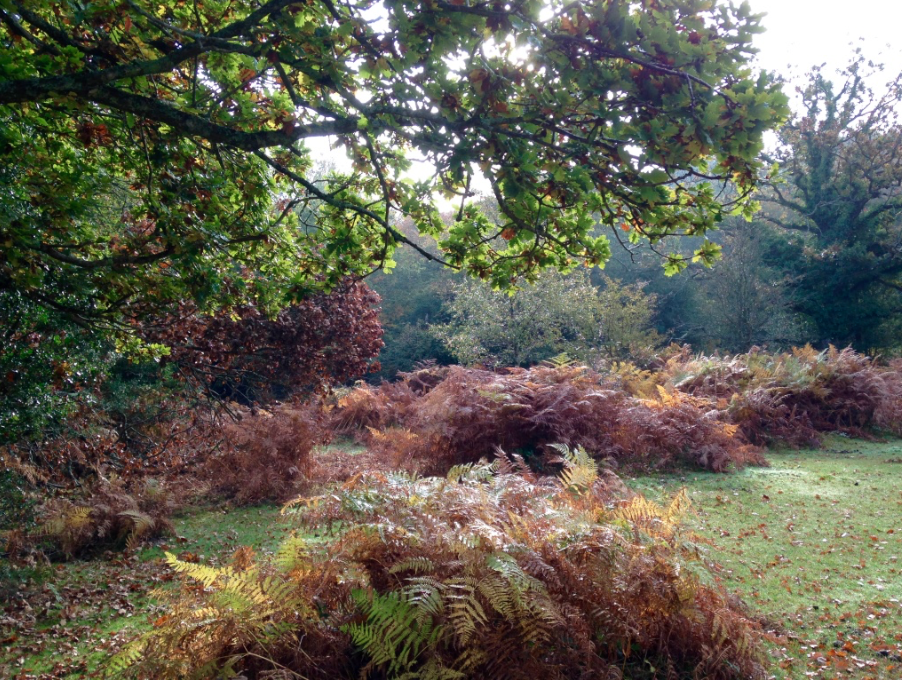 Late autumn in the New Forest is filled with colour.

If you have walked out onto the Forest recently, you will no doubt have been impressed by the variety of colours across the heathland and woods. Some of the higher elevations of the Forest provide spectacular views over the landscape in which oranges and yellows meld with russets and greens for as far as the eye can see. The winds that are beginning to gather strength, as the autumn progresses, snatch the golden leaves from off the trees swirling them about as they float to the floor. At this time of year the trees boast as much colour around their roots as they do in their branches. The temperatures, like the foliage, are dropping too. Hats, scarves and even gloves are frequently the accessories required before stepping out of doors in the early mornings. The New Forest ponies are also donning their winter apparel. Their sleek summer coats are rapidly being replaced by shaggy ones, as their hairs begin to thicken and lengthen to offer some protection from the developing colder weather. The plentiful grazing over the warmer months has ensured that the ponies will be going into the winter with plenty of energy stored in the form of layers of fat. These combined resources provide the ponies with the best means of withstanding the privations of the bleaker months to come.

End-of-season activities
In the meantime, some of the Forest activities are winding down. The pony drift season is coming to an end, which is just as well. Only a month or two ago, it seemed, I was attending the round-ups in summer-weight clothing and, like my fellow commoners, seeking any bit of shade to avoid standing under the baking sun. Now, we are all stamping our feet and blowing on our hands to keep warm! The only thing hot these days is the gossip. We back up to the trees or the gorse bushes to stay out of the prevailing wind, only daring to appear when the sound of ponies hooves thundering towards us means that we must take up our positions to channel the ponies into the pound. By now some of the ponies are getting wise to the round-ups and are displaying ingenious tactics to avoid being caught. Recently on one drift a group of riders were bringing in a single mare at a full gallop. She had proved particularly difficult to round-up and so riders were either side of her, lining her up for the pound. Without any warning she stopped absolutely dead in her tracks but of course the riders, being unprepared, carried on going at speed. Quick as a flash the mare turned on her heels and galloped off in the opposite direction. By the time the riders had collected themselves and turned around, she was gone. A few Saxon oaths were muttered, I can tell you. As the riders went off in search of the errant mare the rest of us quickly returned to the shelter of the gorse, looking very much like a row of sentries returning to their boxes.