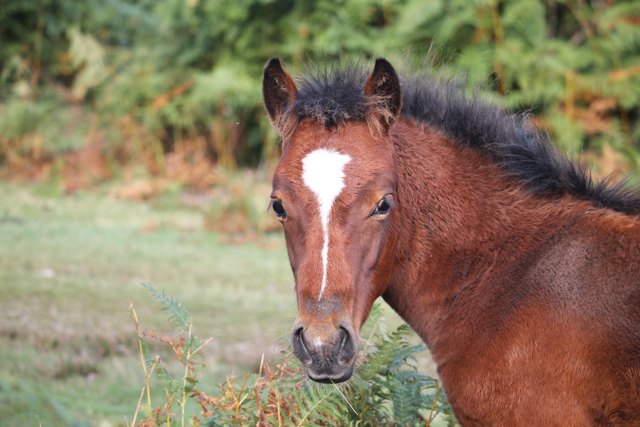 Each generation of foals born on the New Forest follow an ancient lineage.

Madcap kiss-chase
Regular visitors to the New Forest will notice a change in mood among the herds of semi-feral ponies. For the four weeks or so that the stallions are free to roam the normally tranquil atmosphere of the Forest becomes electric. There are fifteen stallions being turned out this year to take up take up temporary residence in specific areas of the New Forest*. The mares in those areas will do just about everything they can to attract the attention of the boys. They become completely obsessed and seem to loose all sense of propriety and self-regard. The initial courtship of the Forest ponies seems to involve an awful lot of galloping about in a madcap game of kiss-chase. Large groups of mares can often be seen pursuing the stallion at high speed through the heathland, up and down the valleys and even across the roads. Consequently, it’s a time for all users of the New Forest to be aware and to take extra care when out and about, particularly on the Forest roads.

Rough wooing
When the mares and the stallions finally get together their courtship can seem very aggressive. This rough wooing is characterised by displays of kicking, pawing the ground, stamping and biting. The mare and stallion will sniff one another often accompanied by incredibly loud squeals or roars. People who have only ever heard horses neigh can be quite alarmed by the noises they make at this time, as they can often seem blood-curdling. The stallion may also exhibit ‘flehmen response’, which is also known as the lip-curl, or horse-laugh. It is an extraordinary facial gesture and does look as if the horse is sharing a joke but is actually a technique used by horses and ponies to amplify smells. The stallion uses his sense of smell to check which mares are in season and receptive to him before he makes his advance.

Alpha mares are the herd leaders
Even though they are free to roam across the whole of the New Forest the herds of semi-feral ponies tend to stay in their own territories. The herds are generally made up of small bands of family members and the size of the territory they share will depend upon the availability of natural resources, such as grazing, water and shelter. Most people imagine it is the stallion that leads the herd but it is in fact a dominant or alpha mare. She is the one who knows the area and its resources. The alpha mare generally leads the band from place to place and has priority access over available resources. These mares have been known to leave their territories in pursuit of a stallion when one has not been turned out in their area; or they fancy another one turned out elsewhere, such is their urge to reproduce. Indeed, many commoners have been surprised by the arrival of a foal from a mare that has been in a ‘stallion free’ area. If a mare does become impregnated by the stallion the gestation period for a New Forest pony is 11 months. So next year between April and May foals will be begin to be born on the Forest and the cycle will begin all over again. 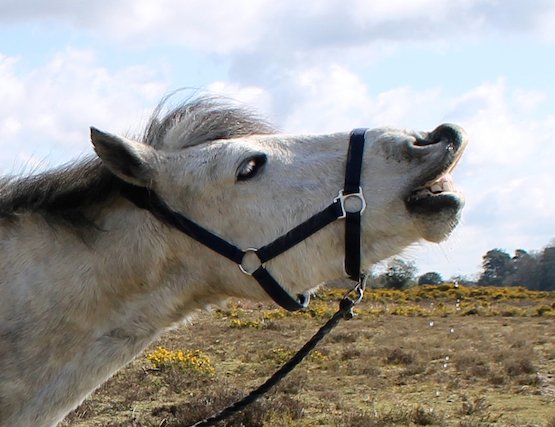 The ‘flehman response’ is used by ponies to amplify smells.