Posted on January 8, 2018 by newforestcommoner

The commoners’ cattle roam the New Forest but will often return to the holding for food.

Commoners are practical people. Indeed, one of the most useful gifts I’ve ever been given is a commoner’s staff. I take it with me everywhere, because I never know when I’ll need it. The best ones are made from wood, locally crafted, with a top fashioned into however it please the owners. Some are very plain, some have straps, and some have distinctive tops or embellishments. Mine is a little thicker than a walking stick and measures to about chest height. It is made of polished wood from a blackthorn, which is the small deciduous tree found commonly in the British countryside that produces fruit known as sloe berries. Followers of Harry Potter will know that wands made of blackthorn are best suited to a warrior, and that to become truly bonded with their owners they need to pass through danger or hardship. In British folklore blackthorn is also known as the increaser and keeper of dark secrets, but I’m not entirely sure that any of this was known or was even a factor when the staff was purchased for me. You’ll notice that commoners very often have a stick or staff of their own to hand, as it is an implement that serves all manner of different uses, such as testing the depth of pools of water or muddy ground; leaning on while waiting at a drift or during the pony sales; and, as I found out recently, for herding cows.

Help herding cows
A commoner friend of mine recently phoned and asked for some assistance in bringing in a herd of cows from off the Forest. She only keeps a small herd, no more than a dozen or so, but it’s often useful to have a few people helping out during such manoeuvres just to ensure the process runs smoothly, particularly when the route involves roads with many junctions. Luckily, my friend has a good relationship with her cows and they know her by sight and by the sound of her voice. When she shakes a bucket of feed and calls “C’mon” they come. Her cows also recognise her 4X4, because it is from the back of this that she delivers hay on a regular basis, and will follow it willingly when the thick slices of dried meadow grasses, which were harvested over the summer, are being doled out of the back. So, I was stationed at the gate of the field into which the herd was being placed, ready to open it at the right moment. My friend in her 4X4, with a passenger rattling a bucket of feed out of the window, slowly progressed through the village towards the pasture. The field was some way off and, while I waited, leaned on my staff taking the opportunity to observe the beauty and tranquility of the countryside around me. Far off into the distance I could hear the calls of “C’mon” and the excited sound of cows mooing getting ever louder, as the steady progression got ever closer. Eventually, I could see in the distance the slow approach of a 4X4, hazard lights blinking, with a herd of cows trotting obediently behind it. The 4X4 stopped just past the gate and, using my staff as a pointer towards the field, the cows obediently galloped into it. Job done. Unfortunately, the cries of “C’mon” are universal to all Forest livestock, it seems, and we then had to disperse a large gathering of ponies, donkeys and cows, belonging to other commoners, which had heard the calling and commotion, and had come off the Forest in answer. My staff came in very handy for that job too. 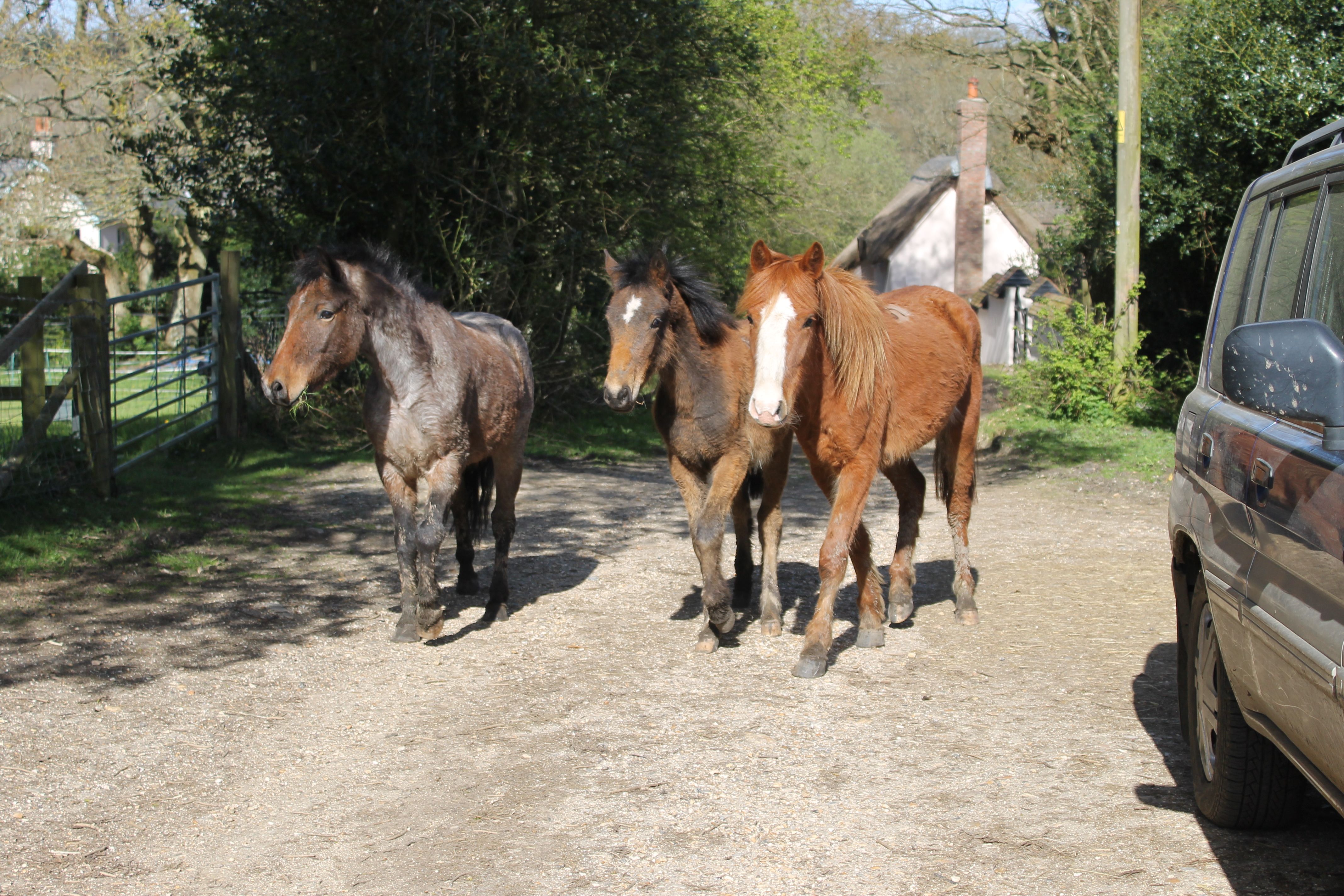 Cries of ‘c’mon’ across the New Forest are likely to be answered by the free-roaming livestock.