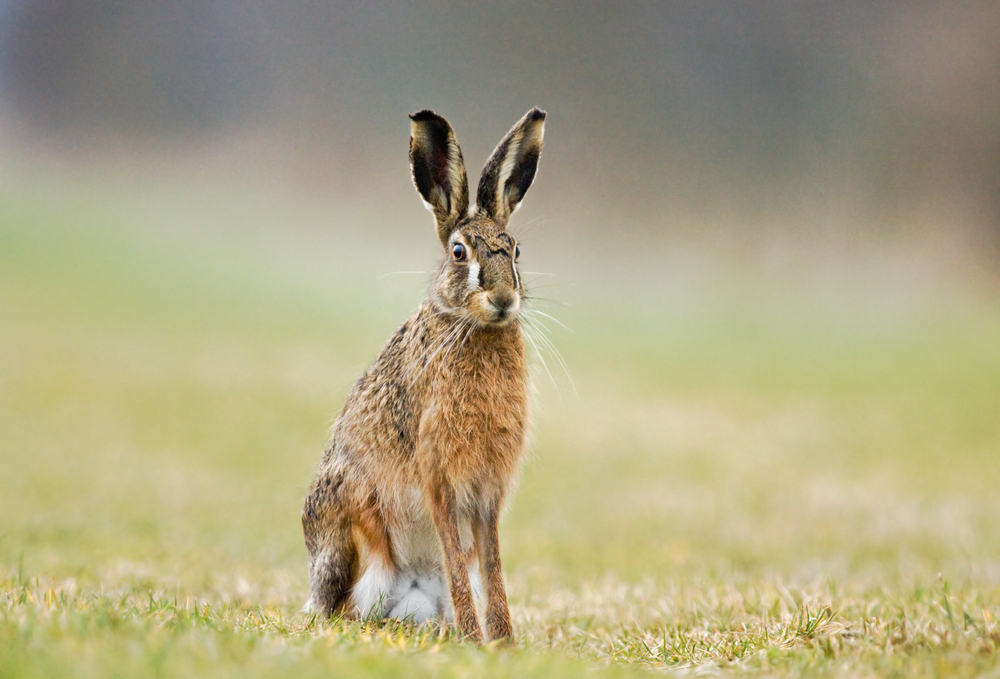 Brown hares were once found in the New Forest but are now rarely seen, if at all.

On a recent journey away from the Forest, where I had the pleasure to be a passenger rather than the driver, I was able to look out of the window and admire the scenery instead of concentrating on the road as usual. Passing a wide expanse of grassland I spotted the tell tale silhouette of a brown hare (Lepus europaeus), as it moved through the sward. This is an outline so distinctive that there is no other creature that can even begin to resemble it. Though in some circumstances hares are often mistaken for rabbits (or the other way around), which is much the same as confusing horses with cows. Thankfully for the uninitiated there are other clues, both physical and environmental, that reveal its true identity. Hares, for instance, are much bigger than rabbits and have longer, larger ears with a black tip to the ends. Hares are predominantly solitary creatures, though a lack of choice in places for them to eat may mean that they band together when feeding at suitable locations. Rabbits, on the other hand, are sociable; living in groups, know as herds – just like horses and cows. Hares live above ground in a ‘form’, which is a shallow depression in the ground or grass, and their only defensive strategy is to run from predators (now you understand why they need larger, longer ears – to hear their enemies coming). Rabbits live under the ground in burrows, often with a system of warrens, which they will run to, and hide, if threatened. The offspring of the rabbit is known as a ‘kitten’ or ‘kit’, whereas the offspring of a hare is known as a ‘leveret’. Rabbits make excellent companion animals, but hares are completely unsuited to life in captivity as pets – though many have tried to tame them.

Hare in decline
Hares were once found in the New Forest, but are now rarely encountered, if at all. According to the Hare Preservation Trust, during the late 1800s there were about four million brown hares in Britain, but their numbers have declined by more than 80% during the past 100 years and the decline continues.[1] There are several factors identified as possible causes for the loss of brown hares in our countryside, including changes in farming practices that are not sympathetic to the hare’s lifestyle. In the New Forest, common opinion points to the rise in the number of dogs allowed to run off the lead. Even our most docile pet, once off the lead and free to run, will follow their instinct and begin hunting.[2] Unfortunately, hares leave their young in the form, only returning once a day for the first four weeks to feed them. During this time the leverets are vulnerable to predation from dogs. The baby hares can be killed and eaten without the dog owner even realising that it’s happened. Adult hares can reach speeds of up to 72 km.p.h (45 m.p.h)[3] and are pound for pound are faster than a cheetah, so are unlikely to be caught by dogs; it is the loss of baby hares that is a another factor in their population decline. In order to preserve this fascinating and alluring species it is up to us to be mindful of their young during their breeding season, which lasts from February until September.  This is true for other wild creatures, including our ground nesting birds, and another good reason to stay on the designated tracks with our dogs under control when out enjoying the New Forest.