Posted on September 27, 2015 by newforestcommoner 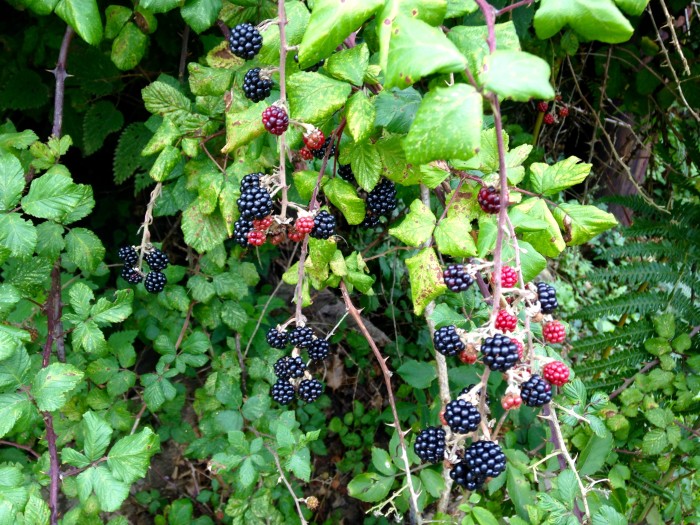 At this time of year the hedgerows are abundant with fruit that can be gathered for making seasonal jellies, syrups and liqueurs.

The warm weather of late (September 2015) has been a welcome accompaniment as I perform the last of the autumn harvesting. Most of the vegetables from the raised beds have been picked and preserved ready for use over the winter. The sweet chestnut and cobnut trees are now beginning to produce their edible seeds and it’s a competition to see who will get to the nuts first – the squirrels or me! The hedgerows are still abundant with fruit, such as rosehips, sloes and elderberries, which can be gathered for making seasonal jellies, syrups and liqueurs. In accordance with time honoured tradition blackberries need to be harvested before Old Michaelmas (10th October), as this was the day that Lucifer was expelled from Heaven. His fall from the skies was ended when he landed in a blackberry bush. In his rage at falling into the thorny shrub he spat on the fruit and made it unfit for consumption. You will notice that blackberries after Old Michaelmas look very unappetising indeed!

Unwanted fruit is unwanted!
The fruit trees are continuing to drop large numbers of pears and apples, some of which I will collect and store for use over the next few months; the rest will be composted. It is not uncommon for people with a similar glut to dump quantities of apples, or other fruits, from their gardens onto the Forest. I have seen ponies squabbling beside a busy road over a pile of apples left on the verge by, I am sure, a well-intentioned person. Other commoners I have spoken to about this report similar incidents occurring in the car parks and roadsides across the Forest. Such ill-informed largesse only places the ponies in real danger from vehicular traffic. Bylaws prohibit the feeding of the Forest ponies, either by hand or by placing out foodstuffs to be eaten by the free-roaming animals, unless of course you are its commoning owner. Feeding the ‘wild’ ponies is not welcome nor is it necessary. Generations of ponies have survived and thrived on the natural resources provided by the Forest.

Last of the summer shine
As if to prove my point, at the drifts, the pony round-ups that occur each autumn, the commoners are commenting on just how well the ponies seem this year. The animals that are coming into the pounds for processing look fit, healthy and well fed, which is how they need to be going in to the leaner times of winter. Even though the recent daytime temperatures have been pleasantly warm the night times are definitely chilly. Winter is coming. The ponies will have already started to shed their fine summer coats and will begin to grown thicker winter ones, in order to preserve the fat layer they will have acquired on the good Forest grass over the spring and summer months. On sunny days you’ll often catch them on the south-facing hillsides warming themselves by soaking up the rays while they can. It would seem that I am not the only one who appreciates the last of the summer shine.

The New Forest (Confirmation of the Byelaws of the Verderers of the New Forest) Order 2010.