Posted on September 14, 2015 by newforestcommoner 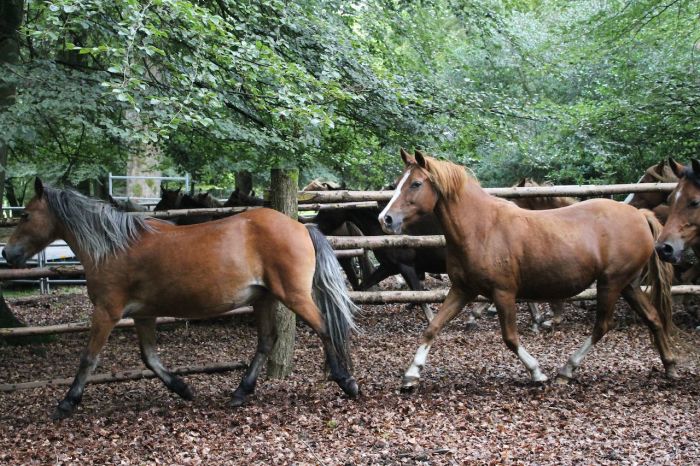 The New Forest ponies were once described as being ‘the property of vagrants and smugglers, not worth more than 2/6 a head.’

During a trip to the New Forest recently I happened to pass through a village where a cricket match was taking place. All the players were dressed in white and the pitch was a manicured village green that was surrounded by quaint cottages. Free-roaming donkeys were nibbling at the edges of the verge and the sun was shining warmly. A friend, who was accompanying me on my journey, remarked upon the quintessential Englishness of the sight and how it was the very picture of traditional village life. I secretly smiled to myself. In the past very few places within the New Forest would have been associated with such a picturesque tableaux of civilised behaviour.

An indolent race
For centuries life for the residents of the New Forest was hard, with many living in grinding poverty and on the edge of lawlessness. In 1791 William Gilpin, vicar in the Parish of Boldre, remarked that “in general they are an indolent race; poor and wretched in the extreme. Instead of having the regular returns of a week’s labour to subsist on too many of them depend on the precarious supply of forest pilfer. Their ostensible business is commonly to cut furze and carry it to the neighbouring brick kilns; for which purpose they keep a team of two or three forest horses: while their collateral support is deer stealing, poaching or purloining timber.” The reputation of the New Forest ponies fared no better, being described as ‘the property of vagrants and smugglers, not worth more than 2/6 a head.’

Illegal activities
Free trading or smuggling, as it was better known, was also an important part of the local economy. In 1883 John R Wise observed that ‘till within the last thirty years, smuggling was a recognised calling. Lawlessness was the rule during the last century.” Indeed it was, but some gangs went even further. A group of bandits, who were reported to have taken possession of Ambrose Cave, near Lymington, would supplement their illegal trafficking activities with wholesale burglary across the county. So violent was the gang that, in the end, a troop of soldiers was required to root them out.

Anti-social behaviour
Towards the late nineteenth century there were complaints about the anti-social behaviour of some of the other Forest inhabitants. At that time stallions, bulls and jack donkeys were permitted to roam the Forest all year round and their amorous encounters caused some residents a great deal of consternation. J. W. Gunning, the vicar of East Boldre, complained to the Verderers in 1888 that the courtship behaviour of the jack donkeys, in particular, would have an ‘evil effect ‘on the children of his parish and corrupt their moral habits. The following year he wrote to say that ‘my daughters cannot go out, nor any lady call at my house with such disgusting sights and noises going on all day and night.” An Agister reported in court that no one else had complained about the behaviour of the donkeys and that, in his opinion, he believed the vicar’s neighbours were turning the donkeys out deliberately to annoy him!

The amorous courting behaviour of the free roaming donkeys caused the vicar of East Boldre to complain to the Verderers in 1889.