Posted on August 24, 2015 by newforestcommoner

A ‘forest’ was formerly associated with an area where game was preserved for royal hunting, unlike today where we think of a forest as being a place filled with trees.

Nowadays we think of a forest as ‘a place covered in trees’ but in medieval times it was understood to be ‘a reserve for royal hunting’. An area of forest could include whole villages and other settlements as well as woods, bogs and heathland. When William the Conqueror created the New Forest in 1079 he also introduced forest laws to protect the venison and vert, which were the beasts of the chase and the greenery they depended upon. So severe were these laws the Anglo-Saxon chronicle reported that they were designed to ‘leave the English nothing but their eyes to weep with.’ Whereas previously the Forest people had been able to exploit the available natural resources of the landscape after the introduction of these harsh laws there were serious, even fatal, consequences for living off the land. Disturbing a deer meant punishment that included blinding or having a hand cut off, and actually killing one, even to feed hungry children, could lead to execution. The Forest residents were not even permitted to gather fallen wood or clear the land, even if it were their own.

Stable stand Dog draw Back bear Bloody hand
After concessions were granted in Henry I’s Coronation Edict of 1100, Magna Carta in 1215, and the Charter of the Forest in 1217, things got a little bit easier for the Forest inhabitants. A judicial system to hear cases of forest law was introduced and by 1217 the death penalty for poaching was abolished. Nevertheless commoners were still not permitted to hunt in the Forest and their dogs would often have to have parts of their paws amputated or ‘expedited’ to prevent them from chasing game. Gradually the legal system began to offer some protection to the common people. Officers of the Crown could not lawfully arrest an offender against the venison and vert unless he was caught in either of the following situations:‘Stable stand Dog draw Back bear Bloody hand’. Stable stand indicated that the man had been found with a long-bow or cross-bow bent at the ready or had dogs or hounds on a leash ready to let them off. Dog draw implied that the man had already wounded a deer or wild boar and had been found using a dog or hound to draw the animal or follow its scent in order to catch it. Back bear meant that the man had killed and recovered the animal and had been caught in the act of carrying it away on his back. Bloody hand literally meant being caught ‘red handed’ with the suspect’s hands covered in blood, whilst in the Forest.

The Forest judicial system
Any of these circumstances were enough for the suspect to be arrested and committed to prison where they would await trial. According to Manwood’s Treatise of the forest laws: ‘punishment is by judicial sentence at the Justice Seat, and to be fined at the discretion of the Lord Chief Justice, and committed till he pay the fine, and then and there to bound to the Good Behaviour in the Forest and forever after.’ However, the court system was complicated and different levels of the judiciary would hear different levels of crime. The Court of Attachment, was held every forty days, and presided over by Verderers and the Warden, or his deputy. The Court of Attachment did not possess the power to try or convict individuals, and such cases would have to be passed up to the more senior Swainmote, which could try offenders before a jury of freemen and was held three times a year. It was the highest-ranking Court of Justice Eyre that could pass sentence on offenders of the forest laws but it was held every three years or more.

The Verderers’ Court
By the middle of the nineteenth century it was clear that the laws, offices and institutions of the Forest judiciary needed reform. While the current Verderers’ Court in Lyndhurst has its origins from medieval times it was reconstituted in its present form as a result of the 1877 New Forest Act. The Act abolished the former oath of allegiance to the Crown and the Verderers now work in the interest of the commoners, common rights and the New Forest landscape. The Court meets in ‘Open Court’ on the third Wednesday of each month at which the public may address the Verderers on any matter relevant to the management of the New Forest and subject to the Court Regulations. It is well worth a visit to see one of the oldest courts in the land perform its functions in managing the New Forest of today. 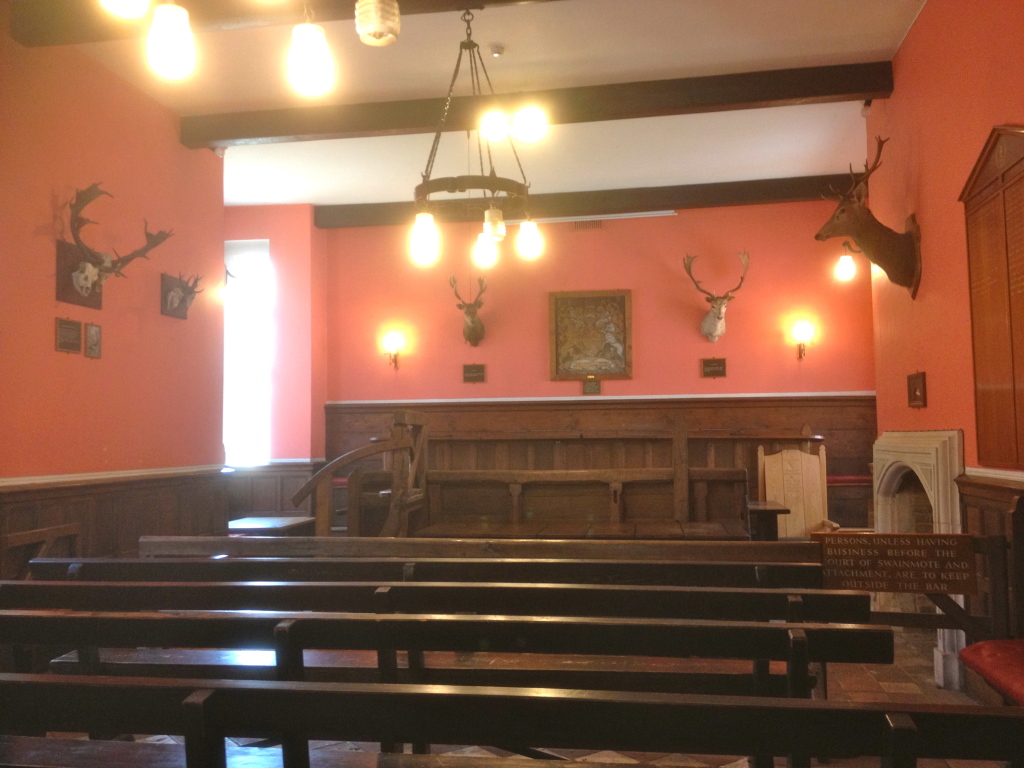