Posted on March 9, 2015 by newforestcommoner

New Forest ponies are known as the ‘architects of the Forest’ because their grazing habits shape the land.

Since writing last week (March 2015) about people hand-feeding and petting the free-roaming ‘wild’ ponies on the New Forest I’ve had several readers get in touch to tell me about incidents they’ve witnessed. Some of these incidents have included families encouraging young children to feed or stroke the ponies, and others where people leave food on the roadside verges or feed the animals from inside their vehicles. This type of behaviour needs to be discouraged as it is potentially dangerous to the humans and equines alike. As well as encouraging the ponies into the car parks and onto the roads, where they will be in danger from vehicular traffic, there is a concern about the types of food that people are feeding the ponies. What might be good for human consumption may not be appropriate for a pony. It is also contrary to the New Forest Byelaws, which prohibit the hand feeding of the animals unless it is by the owner, a person appointed as their agent or an Agister. The Byelaws further state that no material may be placed in the Forest that might be consumed by the commonable stock unless it is by the owner or a person appointed as their agent who may place straw, hay or other feedstuffs out for the animals as approved by the Verderers.

Some human foods are actually toxic to ponies
All equines are herbivores and have a digestive system adapted for a diet of grasses and other plant material. Considering its size a pony has a fairly small stomach and has to eat little and often. Wild ponies can forage widely across the Forest landscape and spend up to 18 hours a day grazing. Even though it is working most of the time the equine digestive system is actually very delicate and the added disadvantage of not being able to vomit means that any dietary indiscretion or case of poisoning in a pony may prove fatal. Ponies cannot tolerate certain foodstuffs even though humans may easily digest them. Potatoes, tomatoes, onions and chocolate, for example, contain alkaloids that are toxic to ponies. Vegetables such as broccoli, cauliflower and cabbage are very good for people but not ponies. These, and other members of the brassica family, create too much gas in the pony’s stomach and may bring on a severe and life threatening colic. Likewise giving ponies the grass cuttings from your lawn can also prove fatal. Even though ponies eat grass when consumed in this form it ferments too quickly for the pony’s gut to process and the build up of gasses can bring on a fatal attack of colic.

The ‘architect of the Forest’
The wild New Forest pony is known as the ‘architect of the Forest’ because its foraging habits shape the land. In its turn the New Forest pony has been adapted to its environment and has the physiology to live upon the plants and grasses of the heathland, bogs and woods. The ponies learn from their mothers what is good to eat at which time of year in their territories and some commoner’s believe that the ponies even know where to find ‘medicine’, particularly for internal parasites such as tapeworm, as and when required. Generations of ponies living wild upon the diversity of habitat provided within the New Forest have been adequately catered for naturally without the need for human treats and fast food snacks. People who feed the ponies and other animals on the New Forest are not being kind to them and may actually be killing them. 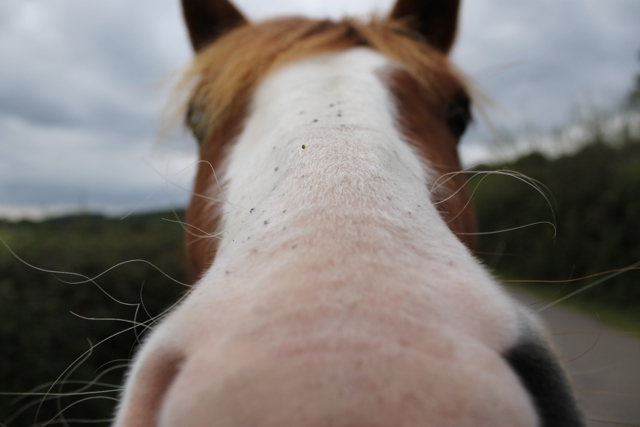 The moment I discovered someone had been hand feeding one of my ponies. (She’s begging for food).