Posted on September 9, 2018 by newforestcommoner 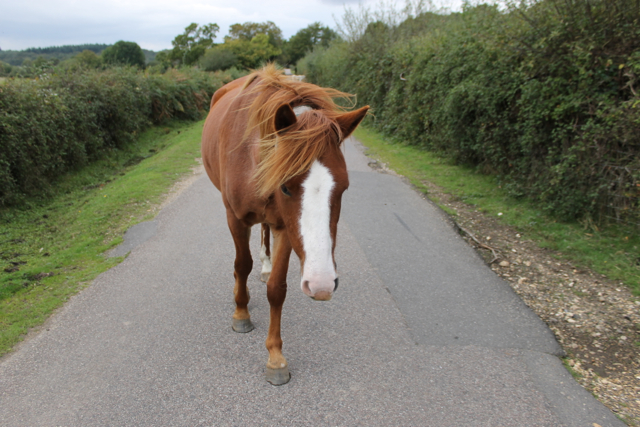 Ponies that regularly wandered beyond the Forest boundary to graze the verges were known as ‘Lane Creepers’.

‘Good fences make good neighbours’ is an oft-quoted phrase that could have been coined with the New Forest and its free-roaming animals in mind. Whilst the New Forest is referred to as ‘the largest tract of unenclosed land in southern England’ visitors will notice that there still seem to be plenty of fences about. The greatest of these is the perimeter fencing that marks the boundary, or ‘perambulation’ of the Forest, which was completed in 1965. This mammoth task, which included the installation of cattle-grids, was undertaken to address the issue of livestock straying away from the Forest. It’s difficult to imagine now but prior to this the Forest animals could wander into places such as Ringwood, Totton, Romsey, up towards Salisbury and even, in one incident, as far as Abbotts Ann, near Andover. These ‘Lane Creepers’ could cause allsorts of mischief and mayhem, as they would often get into people’s gardens, farmer’s fields, or onto busy roads and town centres. Fencing the perambulation ensured that in the future the free-roaming animals would be kept in.

Advice from the Verderers
For people living and working inside the boundary, and those whose properties abut the Forest, the concerns are quite different as they, on the other hand, want to keep the commonable animals out! The responsibility lies with the landowner to ensure that their homes, gardens, fields or other property are donkey, cattle, pony or pig-proof. It is in the nature of the commonable animals to roam freely and if your fencing is inadequate or non-existent then that roaming activity could include your property. The Verderers of the New Forest frequently remind property owners that ‘fences that keep ponies and cattle out will not necessarily be adequate to stop pigs.’ This sound piece of advice is particularly important during pannage season, when commoners with Right of Mast are able to turn their pigs out onto the Open Forest to roam. It is a well-known fact that pigs are masterly at gaining access to or egress from places that you would not think possible. They seem to be very clever at squeezing through small gaps in fences or hedges and have even been known to root underneath wire fencing, lift it up with their snouts and walk underneath it. If you’ve ever experienced the mayhem caused by a ‘wild’ pony that has managed to get trapped in your garden, it is nothing to compared to the pandemonium that can occur when a herd of excited pigs find themselves in the same situation. The commoning owner cannot be held responsible for any damage that may occur in such circumstances and, indeed, the landowner may be liable if the animal concerned is injured or becomes sick as a result of its unintentional captivity.

Village local averts catastrophy
However, there are instances where well-meaning Forest visitors have inadvertently caused commonable stock to get trapped. In one example, which occurred at about this time of year a decade or so again, some holidaymakers were astounded to see a large sow and her many piglets in the middle of the road making their way through one of the villages in the northern part of the Forest. They assumed that she must have escaped and began herding the pig and her offspring into a gateway, which was attached to the only property along the road. This, the holidaymakers had deduced, was where the pigs had come from. Luckily a passing local saw what was happening and stopped them. The property into which the obliging hogs were being ushered was not the pigs’ home at all but in fact the abode of a keen horticulturalist that contained a cherished garden with many prized and specimen plants. Fortunately the local was able to avert catastrophe and simultaneously educate the visitors about free-roaming commonable animals, release the pigs from potential captivity and save the precious garden from a potential porcine riot!

Forest fencing needs to be adequate to either keep animals in or, indeed, keep them out!

Verderers of the New Forest: guidance for homeowners.