Posted on December 6, 2015 by newforestcommoner 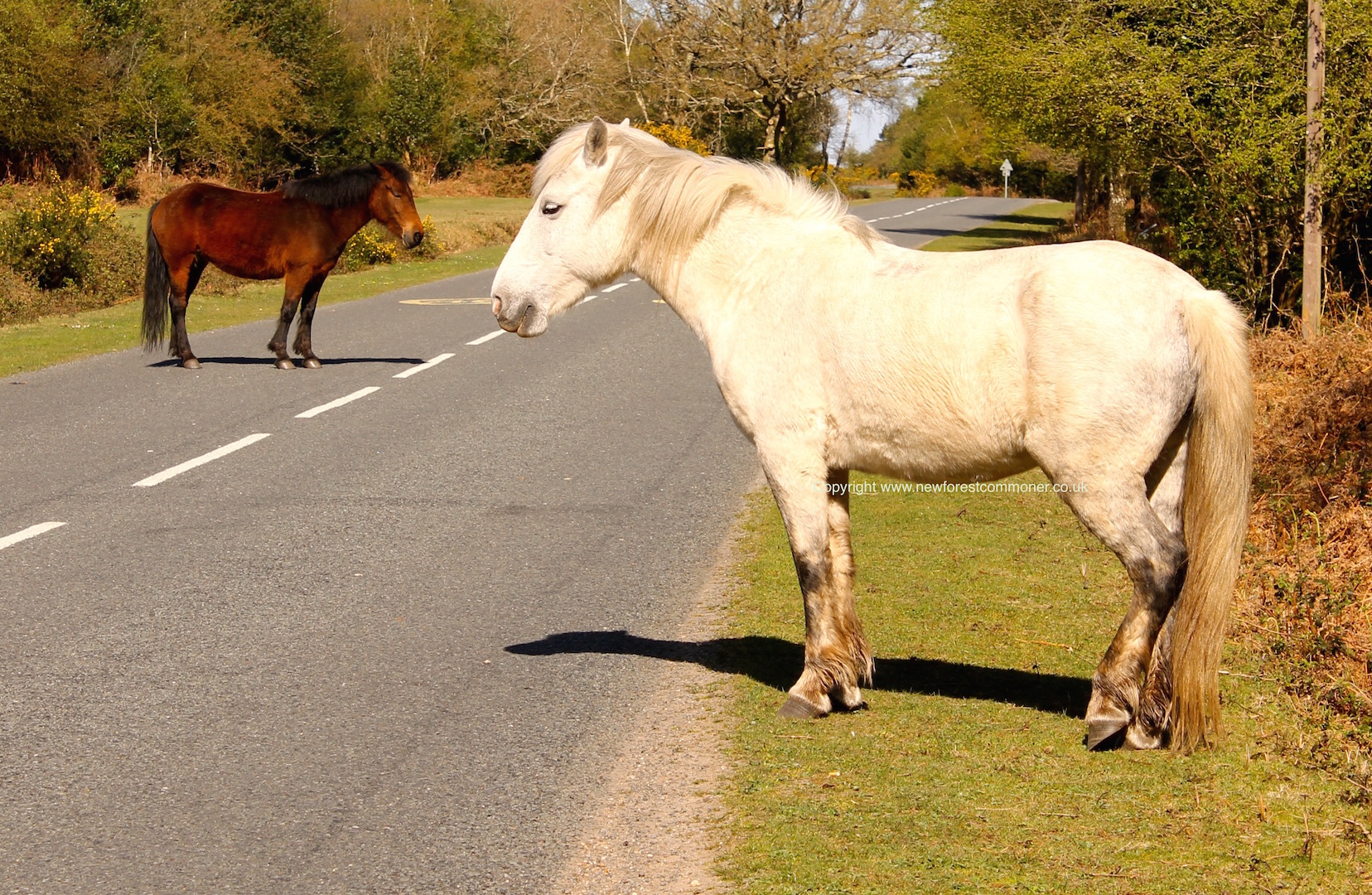 The ‘wild’ ponies use the New Forest road system at all times of the year, day and night.

In 1903 at Brook occurred the first death of a New Forest animal, a pony, caused by a motor vehicle. Since then livestock injuries and fatalities have become a sad but regular statistic. Information about road traffic incidents, involving commonable animals – ponies, cattle, pigs and sheep – is recorded by the Verderers of the New Forest and shared with the New Forest National Park Authority. The results are published and make grim reading. However, when official records began in 1956 annual deaths were around three times what they are today. There was a huge rise in numbers in the 1960’s, with 1962 being exceptional at 313 animal deaths that year. (That’s almost one a day!!) Of course back then the perambulation of the New Forest was not fenced and animals could get onto the A31, A35, and A337 roads. There was also no traffic restriction on the open Forest and, if your vehicle could get there, you could drive (or camp) virtually anywhere.

Meaures to reduce animal road deaths
During the 1960’s the fragile and irreplaceable qualities of the New Forest began to be recognised. The perambulation of the Forest was fenced and gridded by 1964, and by the mid-1970s the A31, A35 and A337 were also fenced. In 1971 the whole Forest was notified as a Site of Specific Scientific Interest (SSI) and this led to, among other things, the creation of designated car parking areas and restrictions of access onto the open Forest. The number of animal deaths on Forest roads began to reduce and by the beginning of the 1980’s numbers stood around 120 per year. Further measures to reduce animal road deaths, such as a Forest-wide 40mph speed limit in the early 1990’s, were introduced, and so by the year 2000 there were 90 animal deaths recorded. Last year (2014) 68 animals were killed on New Forest roads – 43 ponies, 14 cows, 1 sheep and 10 donkeys.

Glow in the dark animals
Although numbers of animal road deaths have been reduced they still represent more than one a week. There is no room for complacency, and many national, county and local organisations are continually involved in initiatives to reduce incidents further. These initiatives include driver awareness training, speed enforcement operations, reducing the growth of roadside scrub, installing barrier fencing to prevent animals crossing at blind spots, and introducing traffic calming measures. There have also been attempts by the commoners, who own the free-roaming animals, at reducing the number of animal deaths on the Forest roads. Because most of the accidents occur at night florescent, high-viz collars, which glow in the dark under vehicle headlights, are fitted to many of the free-roaming Forest ponies, to warn drivers of their presence. But the collars are not infallible. They are designed to detach if the pony gets caught up in undergrowth, so that the animal is not choked or strangled. So not all ponies wear them.

Animal aware road users
The value to the tourism economy, local business and our cultural heritage of having free-roaming animals is widely recognised. The New Forest is special because of the presence of the commonable ponies, cattle, pigs and donkeys. Other national parks, with free-roaming livestock, are also concerned about levels of road traffic incidents and are currently experimenting with painting large stripes of luminous paint directly onto the animals. I’m not sure how practical that would be to implement as, for example, the ponies shed their coats on a regular basis. One would also need to be able to find them, catch them and paint them just as often. It will be interesting to see the results and study the implications of this initiative. All New Forest agencies and organisations are in agreement, however, that educating road users to be ‘animal aware’ is the key to solving this problem and reducing animal deaths even further. The commonable animals have right of way on the Forest roads and will not get out of your way, even if they have seen you coming (1). Save an animal in the New Forest by reducing your speed to under 40mph, giving them a wide berth and being animal aware when using Forest roads. 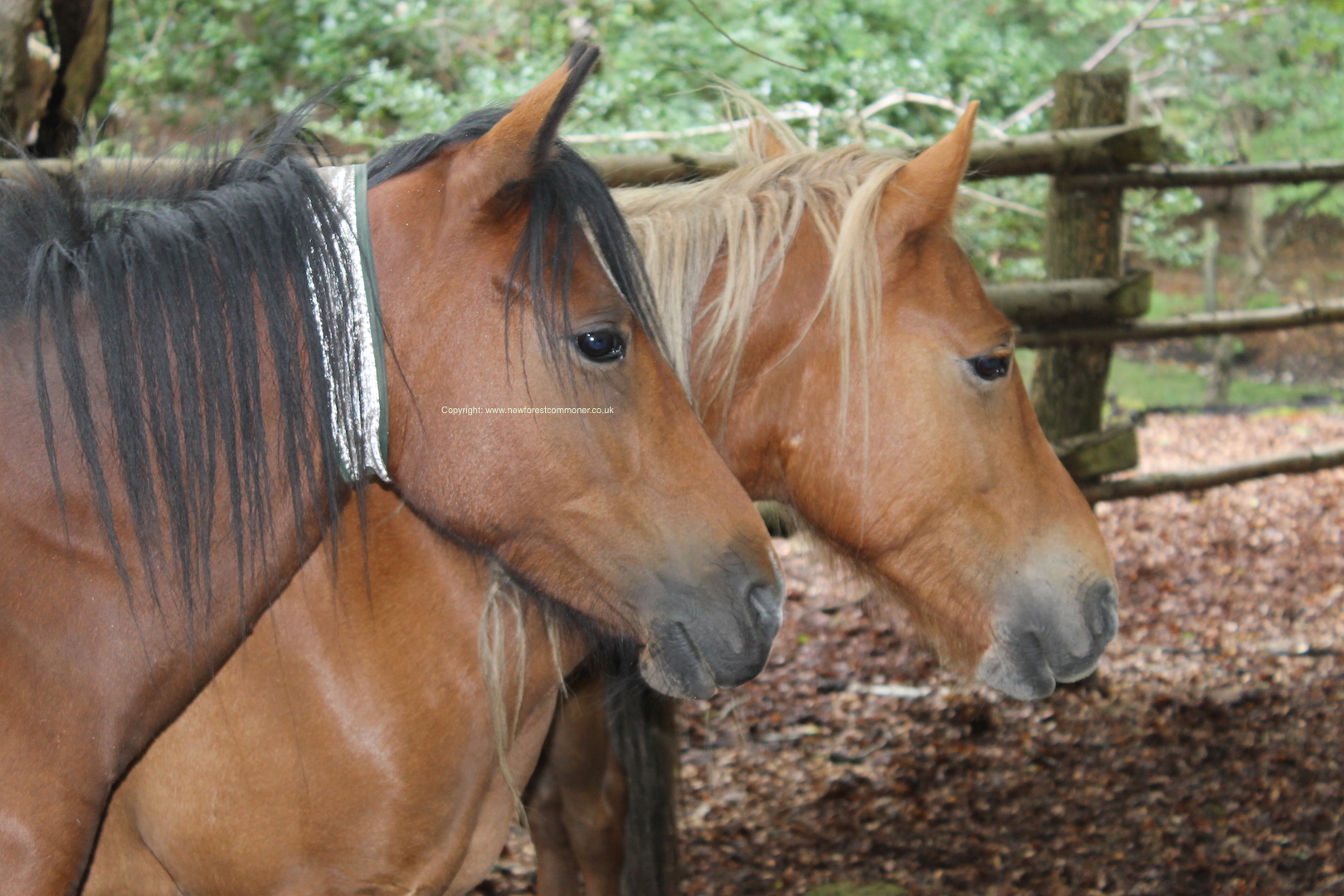 The high-viz reflective collars enable the ponies to be visible at night.