Posted on June 1, 2015 by newforestcommoner 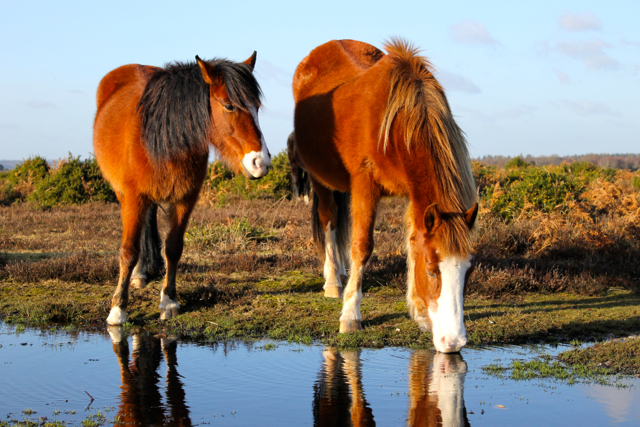 Temporary ponds are not only an important habitat for species of invertebrates and amphibians but also very convenient for the semi-feral ponies and other commonable animals.

I was watching visitors paddling in one of the many Forest streams recently and it made me reflect on the distinctiveness of the watercourses on the New Forest. The New Forest contains streams, ponds, and mires, as well as coastal saltmarshes that are among the most important habitats in Europe. There are also many temporary ponds within the New Forest that are mostly dry for the better part of the year but fill up during periods of rainfall or melting snow. These temporary ponds are vital habitats for many species of invertebrate and amphibian because of the absence of the fish that would otherwise prey upon them. The Hampshire Avon, on the other hand, which brushes the New Forest in the west, is said to contain more fish species than any other river in Britain.

Bad humours and leeches
Visitors to the New Forest have for centuries remarked upon the restorative qualities and health-giving properties of its waters. Medicinal leeches (Hirudo medicinalis) that were so popular with the medical profession up until the late 1800’s are still found today in some of the New Forest ponds or ditches. This parasitic animal was widely used by doctors to suck the blood of patients and draw out the ‘bad humours’ that were believed to be responsible for all manner ailments or disease. The leeches search for food during May to September when the warmer weather increases the water temperature. Its favoured prey are waterfowl, frogs, and commonable livestock but it has also been known to take advantage of any easy meal provided by any obliging visitors who paddle about or wade in its habitat!

Chalybeate iron springs
Some New Forest waters have been given more palatable curative properties, particularly those with ‘chalybeate’ features – a natural spring with iron salts. There are many instances of these springs providing treatments for everything from leg ulcers to ophthalmic conditions. During the Middle Ages, for example, the spring at Fritham known as Lepers Well was widely used as a cure for leprosy. Later it became better known as Iron Well where people wanting to cure their dogs of mange could drop the poor afflicted mutt down into the waters from a wooden hatch. There the dog was able to scramble out ‘after he has finished his ablutions’.

Shultze Gunpowder Factory
But not all of the watercourses have faired well during the history of the New Forest. Latchmoor Brook particularly suffered as a result of the activities at the Shultze Gunpowder Factory, which was established at Fritham in the 1860’s. During the process of making ‘smokeless gunpowder’ large quantities of wood pulp was soaked in nitric and sulphuric acid, which was then rinsed in gallons of water. The toxic effluent was then discharged into Latchmoor Brook. The belief at the time was that because nitric acid and sulphuric acid were used in medicine their effects on the water, wildlife and the human population would be benign. The reverse, of course, was true. Dead fish could be found floating downstream up to five miles away. When the factory closed in 1920 its polluting effects on Latchmoor Brook ceased. It has, however, left one redeeming feature that is still present in the New Forest today. In order to provide the factory with the vast amounts of water required for the industrial process Latchmoor Brook was dammed to make a reservoir. Eyeworth Pond, which was created in 1883, is still visible today but fortunately is now a haven for wildlife. 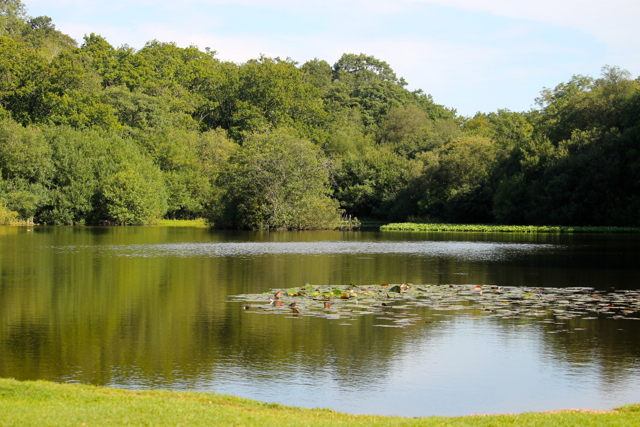 Eyeworth Pond was created to supply the Shultze Gunpowder Factory with water.