Posted on September 29, 2014 by newforestcommoner

Roe deer are one of the five species of deer that roam the New Forest.

It’s a good job I’m an early riser. Before the clock had struck 6am this morning (September 2014) I was doing some stable duties in the yard and heard a commotion in the paddock. My mare was snorting, making that high-pitched whistling exhalation that horses do when they are alarmed. It’s not like her, so I went to check what was wrong. Through the inky blackness of the early morning I could see a car’s hazard lights blinking and hear something or someone rustling through the withy-patch that runs parrallel between the paddock and the road. I called out and a man’s voice shouted back. He’d seen a deer in great distress cross the road in front of his car. It was completely entangled in garden mesh and hardly able to walk. I hopped over the fence to try and help him locate the deer. The man was in a smart suit and certainly not dressed for rummaging in hedgerows for injured wildlife. I convinced him there was nothing more he could do and suggested that he carry on with his journey. I went back to the house phoned my neighbours, also early risers and luckily wildlife savvy, for back-up. I grabbed some equipment and went back to the roadside.

Covered in mesh and hooked up on brambles
In my experience of wildlife rescues this was probably one of the easiest. Through the light of my torch I could see the silhouette of a roe buck against the dense foliage. The poor creature was so tangled in several metres of garden mesh that he could not have run even if he had wanted to. The mesh had now become hooked up on brambles and undergrowth completely trapping him. Lucky for him that the car driver had seen him otherwise his fate would probably have been to slowly starve to death where he stood. I waited for my neighbours to arrive before approaching him. I’d brought one of the horse’s blankets with me and we managed to get it over his head to try and calm him down and also cover his antlers to protect us from them. When we pinned him down he kicked like absolute fury but then gave up. We knew we hadn’t much time. I’d brought some scissors and we were able to cut the mesh from off his antlers, head and front legs. We gave him a quick check to ensure his legs were sound and that he was not bleeding from anywhere. Once we were satisfied that he was free from the mesh and capable of walking we let him go – on the count of three to make sure everyone released at the same time. He sat up for a few moments and then ran to the fence, hopped over it into my field and was gone. We were pleased that we were able to give the little buck a fighting chance of survival. Hopefully he will recover from the shock of his ordeal.

Deer on the New Forest
Living on the New Forest means that deer are a regular sight. The Forest has five species of deer – the most commonly seen are red, fallow and roe deer but it is also home to the elusive muntjak and sika. From early to mid-October the deer rutting season begins for the three largest species – red, fallow and sikka.  The mating season for roe is around July/August. Muntjac mate all year round. Visitors to the Forest may get to see or hear the furious activites of rutting deer in the autumn. Male deer use their antlers in trials of strength and combat during the rut (a Middle English word meaning ‘to roar’). During this time the stags become very territorial and aggressive and can be dangerous. So it’s always a good idea to keep dogs on a lead and avoid getting too close to deer particularly during rutting season. If however, you see an injured deer then it’s best to call the Forestry Commisson (02380 283141) as they have jurisdiction over the Forest wildlife and will deal with it. (The Verderers of the New Forest only deal with the commonable animals – ponies, cattle, donkeys and pigs.) 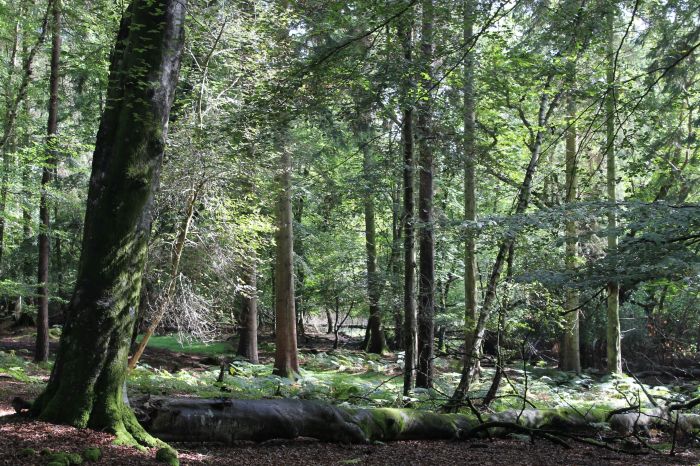 The New Forest is home to five species of deer – roe, red, fallow, sika and muntjac.