Learning to be a Commoner on the New Forest

Posted on September 5, 2013 by newforestcommoner

The formal style of  livery and the ritual employed at the Verderer’s Court serves to preserve and maintain the cultural practices and traditions of the New Forest.

I recently had a meeting at the Verderer’s Office in Lyndhurst to progress my status to a ‘practicing’ New Forest commoner. The Verderer’s Clerk, whom I met with, was very friendly and answered all my questions with cheerful enthusiasm. I was even given a tour of the Verderer’s Court and got to see where the Forest laws were made.

The Verderer’s Court is held in the Verderer’s Hall, a very impressive room within Queen’s House. This principal Manor House in Lyndhurst has been welcoming monarchs, who came to hunt in the Forest, since the Middle Ages. The building is now headquarters to the Forestry Commisson and is the legal venue of the New Forest. The medieval decor and the stately atmosphere of the Verderer’s Hall embodies the history and traditions of the people living in the New Forest. When the court is in session the Agisters wear full livery and business is conducted in the customary manner that would have been used in bygone days. The formal livery and ritual employed at the Verderer’s Court serves to preserve and maintain the cultural practices of the New Forest.

Commoning on the New Forest is a pragmatic enterprise as well as a traditional one. People with ‘Rights of Common’ graze their animals communally and help each other to care and look out for them (although the welfare of each animal is the responsibility of the owner). The Agisters, who are appointed by the Verderers, deal with the daily management of stock on the Forest and work with the commoners to ensure high standards of animal welfare. Any animal ‘depastured’ on the Forest must have a mark or brand to indicate ownership, which makes it easier for the Agister to trace the owner should the need arise. In the autumn during the pony drifts the Agisters will cut a slice out of the tails of the ponies rounded-up to indicate that the owner has been charged for the annual grazing fee.

A few days after my meeting in Lyndhurst I received a letter from the Verderers Office with a copy of ‘The New Forest (Confirmation of the Byelaws of the Verderers of the New Forest) Order 2010’. I will read and digest the six page document to make sure that I comply with the rules. However, knowing the rules of the commoning does not make one a commoner! Knowledge of the traditions, customs and cultural practices of being a commoner are also important but there are no handbooks, guides or written codes of ettiquette to learn from. Luckily, the commoners I have met are incredibly friendly, generous people who are willing to impart their knowledge and give me the benefit of their experience. They do not seem to mind having a novice such as me in their midst. Many have grown up with this way of life and have inherent knowledge of its customs and practices. It’s in their DNA. For others, like me, who became almost accidental commoners the memory of being the newcomer still comes back to them and I feel their sympathy.

All of the commoners I have met so far have been pleased to welcome me into their community. Commoning, I now realise, is a hugely social activity. I will be attending more pony drifts over the coming weeks and I really look forward to meeting more people. Of course the whole point of commoning is to actually run ponies on the Forest and so I will take the opportunity to look out for the beginning of my own herd amongst the ponies brought in on the round-ups. 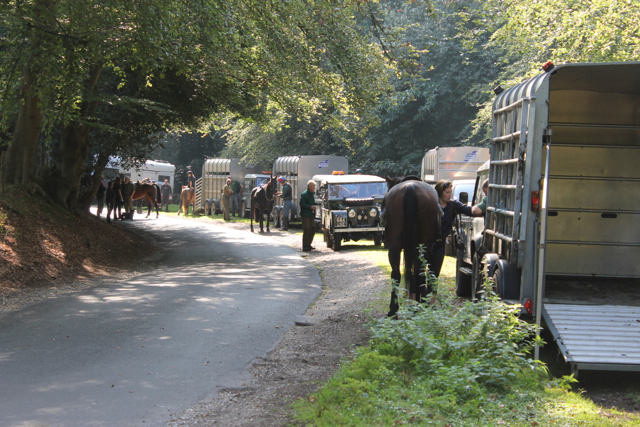 Meeting up with other commoners, such as at the annual drifts, is a good way to learn about commoning.