New Forest: ponies and pigs can be friends

Posted on September 17, 2017 by newforestcommoner

Autumn is definitely here. Pannage season is upon us and the annual pony drifts are currently underway*. During the drifts the semi-feral ponies and foals are rounded up for inspection, released back onto the Forest or taken away to be sold, trained, or kept on their commoning owners’ holdings for the winter. Watching the ponies coming in and seeing them up close in the pound gives their owners, the Agisters, and any attending animal welfare inspectors, a chance to assess their health and condition. The ponies are looking well this year. There has been no shortage of grazing for them and their free-roaming existence means that they can find all the other resources they need to thrive within their territories. I know I am biased, but I cannot imagine why anyone would want any other breed of pony to use for riding or driving. Not only is the New Forest pony a hardy animal, but it is so inured to the landscape that all the hazards and obstacles that test other ponies and horses visiting the area are taken in its stride.

Peril of pigs
At the moment, with pannage season, comes the peril of pigs. It is a widespread belief among the equine community that ponies (and horses) are terrified of pigs – and will ‘flip out’ at the sight or smell of them. No one seems to know why this should be, but I have heard explanations that range from domestic pigs resembling wild boar or bears, to the smell of pigs being close to that of carnivores (lions), or just simply being downright unpleasant to the sensitive nostrils of the horse. There have been no scientific studies on this subject, that I know of, to provide any insight. However, horses being prey animals are, of course, naturally alert to danger and have highly developed senses to help them detect potential threats. For whatever reason the porcine/equine encounter seems to be a thing most dreaded by horse riders. Nevertheless, many of the free-roaming Forest ponies are accustomed to their piggy neighbours and do not seem to find their presence alarming at all. I think possibly it’s the exposure to these odd looking, funny sounding, strange smelling creatures that makes the difference between fear and familiarity. There is plenty of anecdotal evidence to confirm this observation. Owners who stable their horses or ponies on or near pig-farms seem to have fewer problems riding out, as their mounts seem to be less fearful when meeting pigs. Even my own ponies, when staying on the holding, encounter my neighbour’s free-range pigs regularly and are more curious about them, than frightened. A lot depends on the attitudes of the pigs, of course, as with all well-handled animals, friendly pigs are more pleasant to encounter than unsociable swine; but rest-assured if you’re visiting the New Forest you’re not likely to meet the latter; as only peaceable commonable animals are permitted to roam the New Forest. 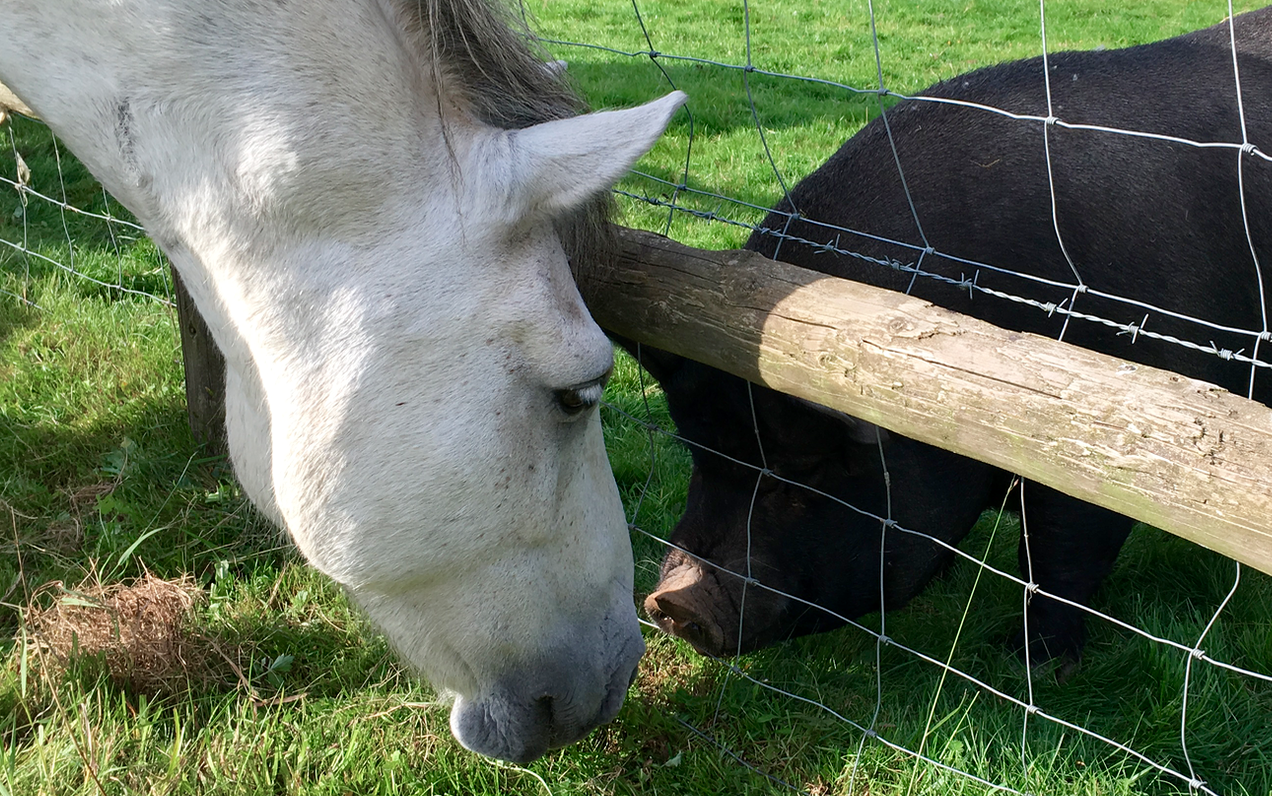 Contrary to popular opinion, pigs and ponies can be friends.

*IMPORTANT NOTE: The Verderers of the New Forest have announced that the ‘drifts’, or pony round-ups, are an essential part of the management of the semi-feral herd to maintain the health and welfare of the ponies.