Posted on August 13, 2017 by newforestcommoner

August is a busy month on the New Forest. The tourist season is in full swing, with lots of people coming to enjoy the scenic beauty of this marvellous landscape. Luckily, the majority of visitors attracted to this unique area know how to respect its special qualities and generally leave it in the same condition in which they found it. However, in times past this was not always the case, and in August 1927 the British Broadcasting Corporation (BBC) took an active part in trying to educate holidaymakers about their impact on the countryside. The following message was broadcast twice on BBC radio* on the ‘eve of all public holidays and on every Thursday evening throughout the summer’,

‘With every general holiday there comes the same story of field, moorland, footpath and road bestrewn with litter, sandwich papers, chocolate cartons, photographic film covers, tobacco covers, orange peel, match boxes, and other forms of refuse, which are to be found wherever the holidaymaker has penetrated. One hears of walls pulled down, farm gates left open, flowers torn up, and of wanton damage in many forms. The litter is chiefly caused by thoughtlessness. Will all holidaymakers please remember that besides offending the eye this litter is sometimes a danger, and that the carelessly disregarded match and cigarette are possible causes of serious moorland, heathland, and woodland fires? We appeal to all listeners to do their utmost to prevent litter being left about or damage done to the countryside’.[1]

National newspapers also reported on the BBC campaign, and urged listeners of the appeal not to scatter rubbish on the countryside and abstain from damaging it. The Times, for instance, reported that as part of the broadcast promotion motorists had been issued with a warning in connexion with the dangers arising from wandering ponies in the New Forest, and an appeal was also made asking holidaymakers visiting the coast, not to bury empty glass bottles in the sand. It was hoped that the transmissions would reach millions of people and that ‘satisfactory results may be obtained by them’. A later report, from 1929, which carried the headline ‘Litter in Public Places’ bemoaned that London parks and ‘other places of popular resort….are rendered unsightly by the accumulation of litter, particularly on Bank Holidays, and….that it cost £17 to clear Kew Green of litter after August Bank Holiday’.[2] In August 1930, the dangers of litter in the New Forest were highlighted in a news report, which stated that in the previous year 175 wild fires had been started ‘by the sun shining through glass bottles’. The anti-litter brigade that was formed as a consequence to call public attention to the matter, suggested a number of measures to combat the problem. One tactic involved ‘motor-car litter parties’ that would patrol the Forest on a given day armed with prongs and baskets for the collection of litter; while a further suggestion was that the anti-litter brigade should provide demonstrations of the correct conduct of a picnic by the proper clearance of the ground afterwards.[3]
Thankfully today, the problem of litter does not seem as bad as it was nearly 100 years ago but, nevertheless, the problem does persist and it seems that no matter what form of education is used, there is a minority of people who will never learn.

*The first regular BBC television broadcasts were not aired until 1936. 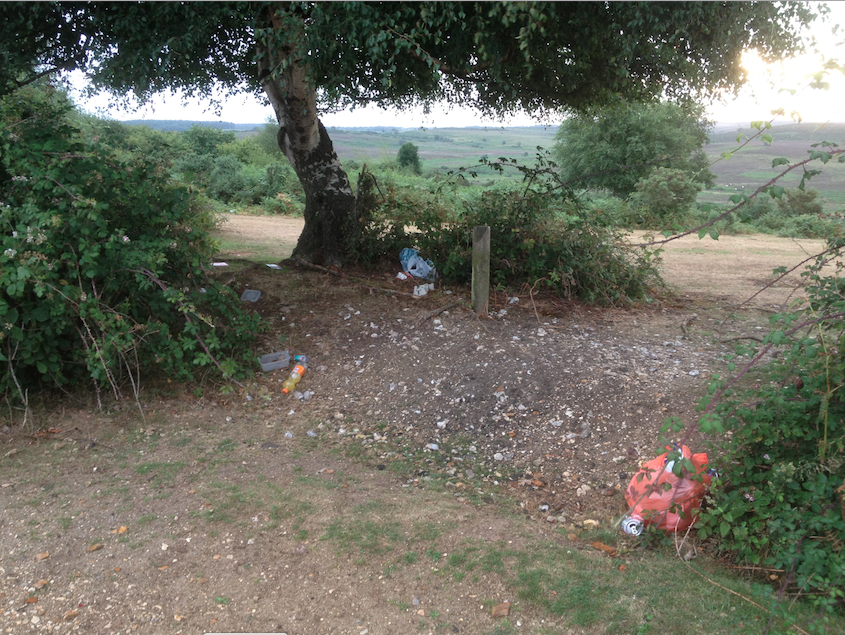 Be a friend to the New Forest and take your litter away with you.