Posted on April 17, 2016 by newforestcommoner 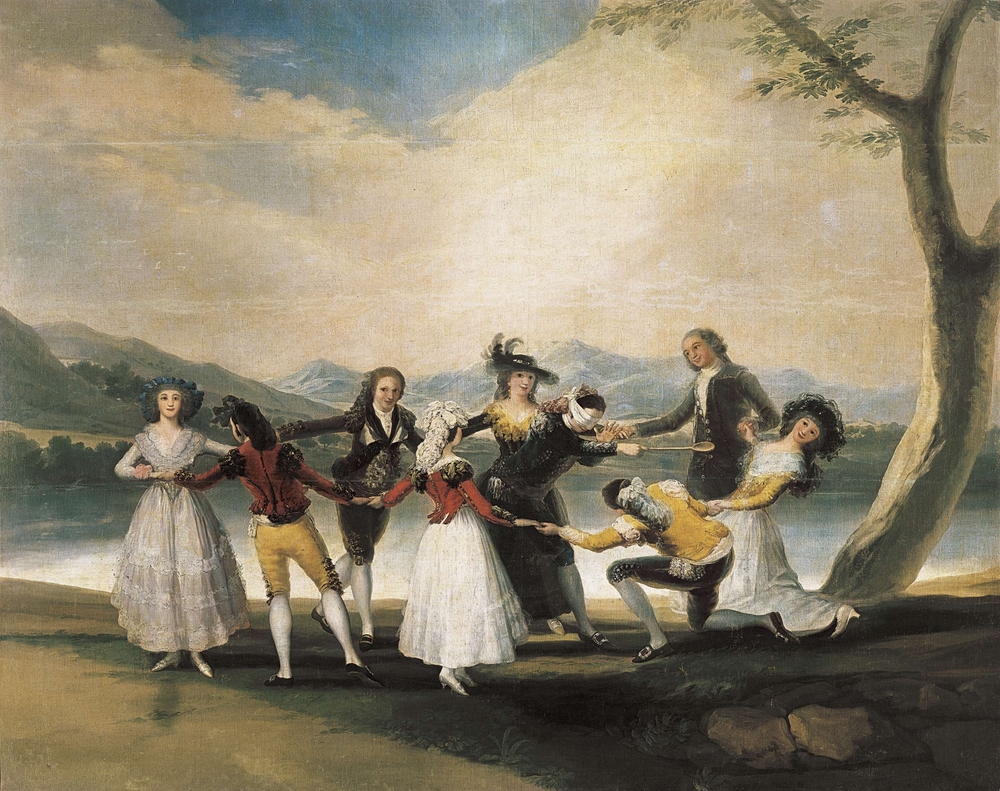 Blindman’s buff was a popular game that had many variations, including the Jingling Match.

The New Forest has always enjoyed a close association with the monarchy. During the eighteenth century it was a favourite destination for George III, who would often stay with his family before moving on to the seaside town of Weymouth. As a result of this royal patronage news of the comings-and-goings of the Forest folk was very popular. In August 1793 a most peculiar sports day was reported in the London newspapers. The venue for this event was more than likely the Lyndhurst Racecourse, where ‘rustic Swains of the New Forest’ were amused by racing and other diversions. One of the sports on offer was a Jingling Match, which according to the report was a very entertaining ‘improvement on Blindman’s Buff’, which was a popular game in the eighteenth century. An area, measuring about 20 yards (18 metres approximately) in circumference, was roped off to make an enclosure into which a man ‘with a number of Bells fastened on him’ had to elude a group of players who were blindfolded. The blindfolded players had to follow the sound of the bells and if they were able to capture the jingler within the time allowed, which was believed to be a quarter of an hour, they won prize money, but if not he kept the cash. There was, apparently, much amusement from all the jostling and frequent falls of the blindfolded men.

The day’s amusements
There were also a series of donkey races held, ridden by women, which resulted in two dead-heats. Women in the late eighteenth century would have been generally very petite, so making excellent jockeys for donkey raceing. Apparently the races afforded much sport, as anyone who has ever witnessed a donkey race can testify. For the men, there were pig catching contests where the winner was the man who could hold the pig by its tail. There is no mention of prizes or, indeed, if the pig was greased, which has often been done to make the task of catching the pig more difficult. The object of the day seems to have been to entertain the crowds, and by all accounts it was a large turn out. ‘There were near one hundred carriages on the Course’ observed the reporter. The day’s amusements were finished off with an elegant dinner at the Crown Inn, Lyndhurst, to which the Lord Warden of the New Forest presented a brace of bucks, and another gentleman gave a turtle, ‘the former was of the finest flavour, and the latter most admirably dressed.’ Many ‘fashionable families’ attended from the local area, as well as ‘visitors from Southampton’. The Crown Inn referred to in the article is probably the current Crown Manor House Hotel, which is located in Lyndhurst’s High Street. The Lyndhurst Racecourse, though, ceased functioning in the late nineteenth century but its grounds were used briefly for the New Forest pony sales and then as part of the course of the Lyndhurst Golf Club, which still exists today.

The Lyndhurst sports day of 1793 included donkey races, with women as jockeys.