Rufus the Red/King William II – death in the New Forest

Posted on August 3, 2015 by newforestcommoner 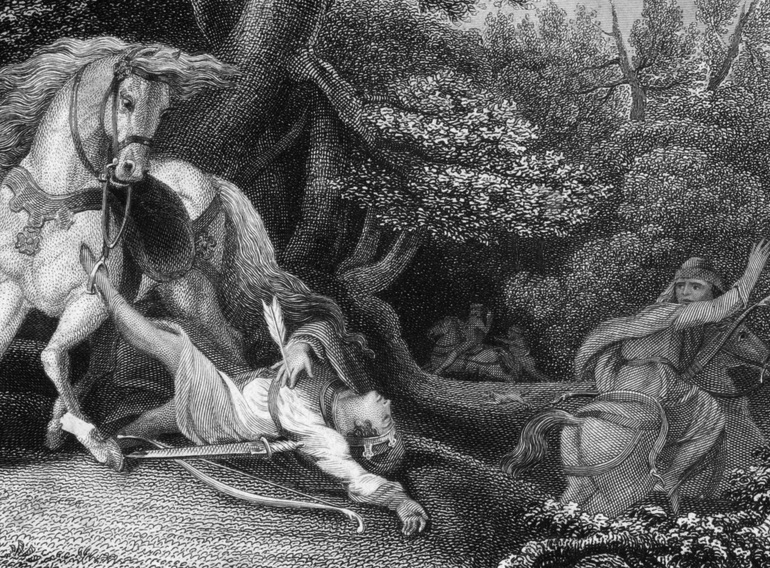 King William II (Rufus the Red) was killed while out hunting in the New Forest – was it an accident or was it murder?

On the 2nd August 1100 occurred an incident in the New Forest so controversial that nearly a thousand years later historians are still arguing about the conclusion – was it an accident or was it murder? The incident of course is the death of Rufus the Red, more properly known as King William II. He died in a hunting ‘accident’ after a deflected arrow, supposedly fired by Sir Walter Tirel, struck the King in the chest. Also in the hunting party was Rufus’ younger brother, Henry. On learning of his brother’s death Henry galloped off with indecent haste to Winchester to take possession of the royal treasury and from there on to London to become crowned King Henry I. It was the speed of this decision that has given rise to speculation that the accident was in fact premeditated regicide.

Family troubles
Very few people seemed to have mourned the death of Rufus the Red who, born in 1056, was the third son of William the Conqueror and Matilda of Flanders. His eldest brother Robert II (better known as Robert ‘Curthose’, which basically meant ‘shorty-pants’) inherited their father’s title as Duke of Normandy in 1087. Another older brother, Richard – often referred to as Duke of Bernay – had died between 1069 and 1075. According to William of Malmesbury, the 12th century historian, Richard had “contracted a disorder from a stream of foul air while hunting deer in the New Forest.” So Rufus had inherited the crown of England. According to reports he was described as “well set; his complexion florid, his hair yellow; of open countenance; different coloured eyes, varying with certain glittering specks; of astonishing strength, though not very tall, and his belly rather projecting.” His nickname of Rufus the Red was gained because of the colour of his hair and, some would say, his hot temper.

Abhorrent to God
According to the Anglo-Saxon Chronicle William Rufus was “hated by almost all his people and abhorrent to God.” He had a reputation for being cruel and avaricious. Unusually for a medieval king he was not at all religious. For most of his reign he was in dispute with his clergy and used church revenues as his own private piggy bank. Much of the Norman aristocracy had lands in both England and Normandy and it was difficult for them not to become embroiled in the ecclesiastical arguments and in the family rivalries of the Conqueror’s remaining sons. It didn’t help Rufus’ public image that the chroniclers of the time were generally monks or ecclesiastical scholars recruited from the ranks of the aristocracy, because they certainly had no love for him. This perhaps explains why he was also described as being “addicted to every kind of vice, particularly lust and especially sodomy.” He never married.

Portents and omens
According to some chroniclers many ‘marvels’ were supposed to have presaged Rufus’ demise, including brooks bubbling with blood, bad weather and ‘signs and visions that appeared in England and foretold the king’s death’. Even Rufus himself on the night before his death had such a bad dream that, we are told by William of Malmesbury, he asked for a light to be brought in and for his chamberlains to stay with him. However, Orderic Vitalis, an English chronicler and contemporary of the king, said that he awoke in a good mood and that while preparing for the hunt, a smith presented the King with six arrows. He is supposed to have kept four for himself and given the other two to Tirel saying; “it is only right that the sharpest arrows go to the man who knows how to inflict the deadliest shots.”

Death in the Forest
Before the party set off, a letter arrived from the Abbott Serlo of Gloucester warning of a monk’s premonition of the king’s death. Typically in his distain for members of the clergy Rufus is said to have dismissed the letter, saying that he had no interest in the ‘dreams of snoring monks.’ The events that led to the king’s death shortly after are generally accepted to be either that Tirel shot the king by accident or that Tirel’s arrow deflected killing the king. Tirel himself is said to have denied the killing even on his deathbed. In any case all his companions left Rufus where he fell and ran away. It was left to a charcoal burner, named Purkis, to recover the King’s body and carry it on a cart to Winchester for burial. (Descendants of Purkis are still living in the area of the New Forest today.)

Coronation Edict 1100AD
Henry who, unlike his brothers, had only inherited money from his father, now became King Henry I. Walter Tirel fled abroad and though he never returned to England his estates remained intact and passed to his heirs, which has further fuelled the suspicion that Henry arranged or was at least complicit in the assassination of his brother. Even though his people had loathed William Rufus his reign had at least one legacy that has resounded through the ages. Henry I, the forth son of William the Conqueror, on ascending the throne in 1100 issued a royal proclamation – the Coronation Edict, which was regarded as atonement for the past abuses of his predecessor and brother. Henry I’s Coronation Edict specified a number of rights to the church, landowners, heirs and even widows. Over a hundred years later, when the barons and the church fell into dispute with King John, the Coronation Edict was rediscovered and the idea of a new and improved document was seized upon, which became Magna Carta. Had William Rufus known that as a result of his reign such a document would emerge to protect against bad rulers he would probably have seen red!

The bad rule of William Rufus led to the Coronation Charter of Henry I in 1100 – was this the blueprint for Magna Carta in 1215?