Posted on July 1, 2015 by newforestcommoner 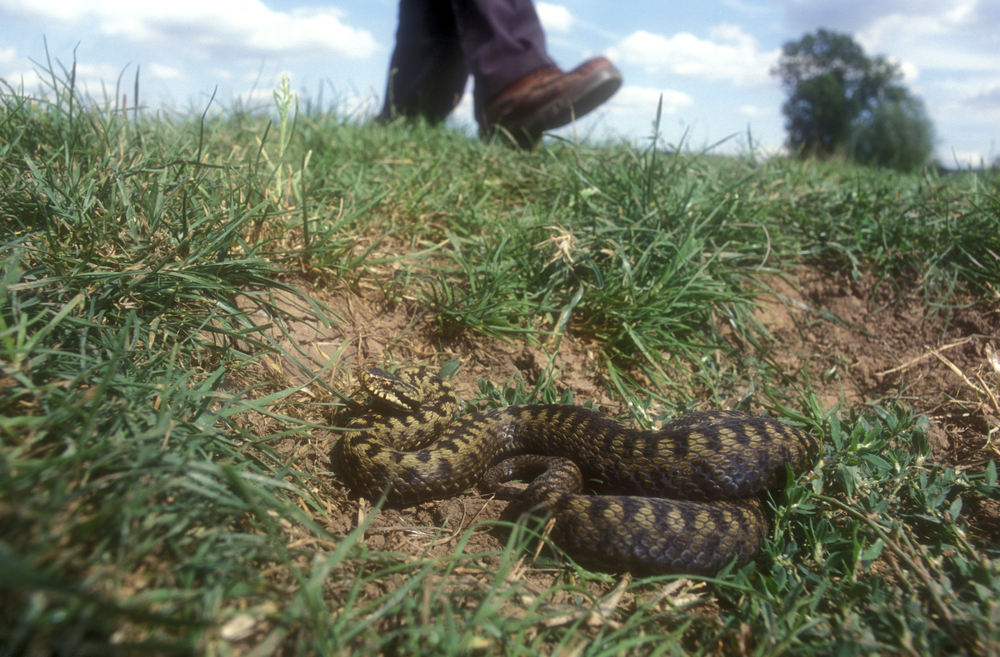 July 1st marks the anniversary of the death of one of the New Forest’s most famous residents. Born in March 1840, in Emery Down, Lyndhurst, he was named Henry but in later life became more popularly known as Harry ‘Brusher’ Mills. He started his working-life in horticulture and, like his father, was employed as a gardener. However, he seems to have changed career in his forties to become a snake-catcher or ‘charmer’ and gained widespread celebrity after an article about him appeared in the 1897 November edition of Country Life magazine. The article mused that; ‘No one who is acquainted with the ancient British legends of great snakes or ‘worms’ haunting various hills and vales of Celtic Britain…can doubt when he sees this wildman of the woods with his strange and bizarre equipment, and his bag of snakes, that he is a true and direct, though unconscious, descendant of the priests of serpents and serpent-worshippers who ‘made medicine’ to propitiate the ‘worms’ and dragons, when Britain and heathenness were one.’

The legend has romanticised the man but even so, by all accounts he was a bit of a character. He never married and led an immensely impoverished lifestyle. His home is variously described as either an old charcoal burner’s hut or a mud and timber dwelling made of his own construction. In the museum at Lyndhurst there are photographs of him sitting beside a wigwam-like shelter made of vertical wooden poles, mud and moss. He was often referred to as a recluse or hermit but he was never that. He enjoyed his celebrity status and would regale visitors with tales of the Forest or chat while they posed to have their photos taken with him. His nickname of ‘Brusher’ was earned when he used to attend the cricket matches at Balmer Lawn and brush or sweep the wickets. He also liked to drink whisky or rum in The Railway Inn at Brockenhurst. On one occasion, according to the stories, he emptied a sack of snakes onto the floor of the pub on a particularly busy day so that he could get to the bar to be served.

He was a very distinguished looking man with a forked beard, felt hat and gaitered boots. Often he would have a tobacco pipe at his mouth. The tools of his trade included a sack and a forked stick, which he referred to as his ‘staff of office’. The grass snakes and adders that he caught were usually sent to London Zoo, as food for the snake-eating birds of prey. It is also said that he would manufacture and sell ointments made from the snakes for various ailments, including rheumatism, and also sell snake skeletons to curious tourists. The Victorian period was a one of intense interest in the natural world. Increasingly the sciences were becoming accessible to the keen amateur or hobbyist and the New Forest became a magnet for specimen hunters and private collectors of all kinds, including those wanting rare plants, flowers, insects and birds eggs. It is not known exactly how many snakes Brusher captured during his working life but it is generally believed to be in the tens of thousands at least. Nowadays of course such harvesting of wildlife is not permitted and laws protect many areas of the New Forest.

His death occurred on 1st July 1905 in an outhouse at The Railway Inn. Some believe it was due to shock, as shortly before his hut in the Forest was vandalised and, such as it was, rendered uninhabitable. It is believed that the deliberate damage was brought about to stop Brusher from being able to claim ‘squatters rights’ under Forest Law and become owner of the patch of land he had inhabited for nearly 30 years. In his memory the Railway Inn changed its name to The Snakecatcher’s Inn where to this day patron’s can perform a libation in honour of this eccentric but very simple man. 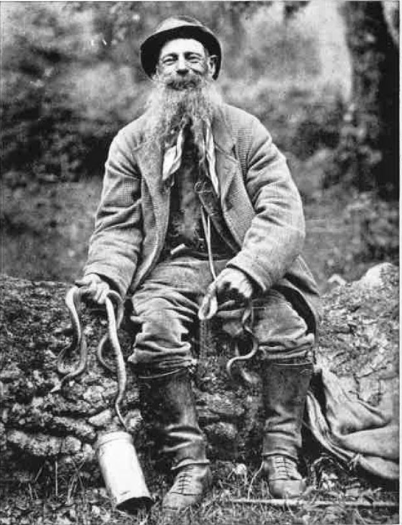 Harry ‘Brusher’ Mills enjoyed a certain celebrity on the New Forest and was a visitor attraction in his own right.