Posted on January 19, 2015 by newforestcommoner 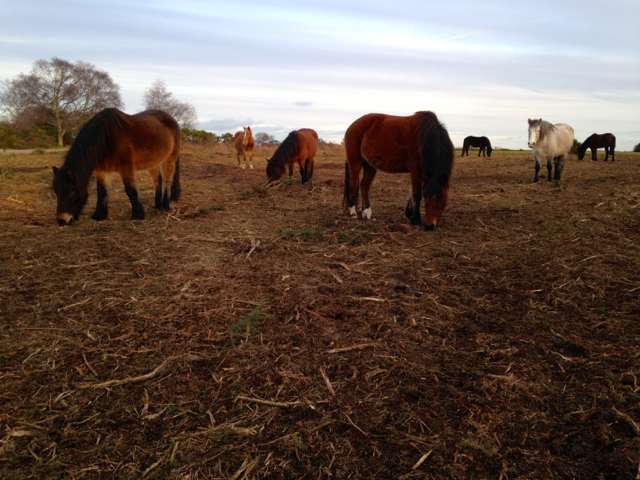 Gorse-cutting is a traditional healthland management practice. The New Forest ponies graze on the crushed stems.

I recently received a call from a commoning friend of mine who told me that the Forestry Commission was cutting the gorse bushes at Godshill. I was urged to go and have a look at a curious sight. Sure enough wide swathes had been cleared from the area surrounding the car park and cricket pitch, giving the landscape an odd and unfamiliar look. However, the spectacle that I had been tipped-off about was not the scale of the denuded terrain but rather the large congregation of ponies that had come to take advantage of the feeding bonanza and were busily hoovering up the crushed stems. There were dozens and dozens of them! They reminded me of the large flocks of seagulls that follow the tractor when the farmer ploughs his fields.

Clearance of the fuzz
The clearance of gorse or furze (or ‘fuzz’ if you are a local) in this way is a legitimate and necessary part of managing the heathland of the New Forest, which has occurred for generations. As they get older the gorse bushes begin to deteriorate and look ‘leggy’. They lose their compactness and value to the Forest animals and wildlife. When gorse reaches about 10 years old it starts to lose its ability to regenerate and even if cut will not re-sprout. By maintaining the gorse and ensuring new growth many species benefit. Birds, such as stonechat, whinchat, meadow pipit and Dartford warbler rely on the presence of gorse, particularly in winter. Reptiles too, including the common lizard, sand lizard, smooth snake, and adder, all favour gorse-dominated environments. The abundant all year round flowers of this important heathland shrub are also valuable sources of nectar and pollen for insects.

Pony’s ready-meal
Traditionally commoners used gorse as a feedstuff during the winter months and would first ‘bruise’ or crush the spiny stems with hand-held mallets to make them more palatable to their animals. The free-roaming ponies, it has been said, have even been seen to crush the stalks of gorse under their hooves before eating them. But of course the mechanical methods employed by the Forestry Commission was able to render large areas of the spikey shrub to the consistency of the softest chaff. The ponies seemed to appreciate their nutritious winter ‘ready meal’ and all heads were down grazing. I have no idea how so many of them had found out about the flailed and flattened gorse but the word had certainly spread.

Gorse  is an important resource of the New Forest. The free-roaming commonable animals and wildlife depend upon it.