Posted on January 10, 2016 by newforestcommoner

New Forest ponies are hardy enough to survive in the ‘wild’, even during short periods of severe weather.

The rainy weather of late (January 2016) has meant that I’ve had to have a bit of a reorganisation in the hay barn to make room for a vehicle that doesn’t like starting in the wet and cold. I had thought only animals liked their creature comforts but this particular mechanical workhorse, though reliable and trustworthy in all other respects, obviously needed a little TLC and I was prepared to make an exception for it. In order for it to fit into the barn though I had to move a large quantity of baled hay and rearrange the pallets on which they were piled, but it was worth the trouble to preserve the starting capabilities of a much-relied upon vehicle. Adverse weather conditions are always a test for the commoners, as indeed they are for farmers in general, and bring challenges that often need effort and a certain amount of ingenuity to overcome. In some cases, like my recent experience, the solution is simple whereas in others the conditions are so severe that they require the involvement of the whole community and, in extreme cases, the whole country.

The Big Freeze 1963-1964
One such instance started on Boxing Day in 1963, when it began to snow. The softly falling flakes were at first a charming feature of the Christmas holidays but were in fact the prelude to what was to become known nationally as the ‘Big Freeze’. As temperatures across the country plummeted, lakes, rivers, and even the sea in some coastal regions, began to freeze. The winter of 1963/4 is the coldest since 1740, with minimum recorded temperatures of lower than -20 °C. In January and February 1964 more snow arrived and freezing gale-force blizzards created snowdrifts that were reported to be as high as 20 feet (6.1m) in places. The whole country was affected, with many roads impassable, schools and businesses closed, villages cut off and power-lines brought down. Farmers everywhere struggled to tend to their animals. Temperatures remained below zero ensuring that the snow stayed on the ground for months.

Emergency feeding of New Forest ponies
The commoners of the New Forest, quickly realising that the cold weather would be setting in for a while, began to organise supplementary feeding for the ponies across the Forest. However, it would not be until March 1964, when the thaw began to set in, that this ‘emergency’ regime would no longer be required. Feeding stations were set up at strategic parts of the Forest by volunteers who would take hay to a set location at a regular time, and dole out bales to the ponies. The availability and location of barns for storing hay was crucial to the process. It took a while before the semi-feral ponies in each location understood the routine, but once they associated the vehicles struggling through the snowdrifts with food supplies they quickly assembled to be fed. Animal-lovers from across the country sent in donations and local people offered their assistance in setting up other feeding stations across the Forest. The snow was so deep in places that the ponies were unable to travel to their regular watering places and were reduced to drinking from puddles on the roads or eating snow to quench their thirst. Ingenious commoners were able to dig down into the ground to find free-flowing water that created make-shift watering holes. The Deputy Surveyor also gave permission for the commoners to cut down holly as fodder for the ponies because the keepers were doing the same for the deer. No one at the beginning of the year ever envisaged just how long the unprecedented bad weather would last, but the committed effort of volunteers who, day-in-day-out, struggled against the elements ensured the welfare of the animals was maintained and so helped to increase their survival rates. 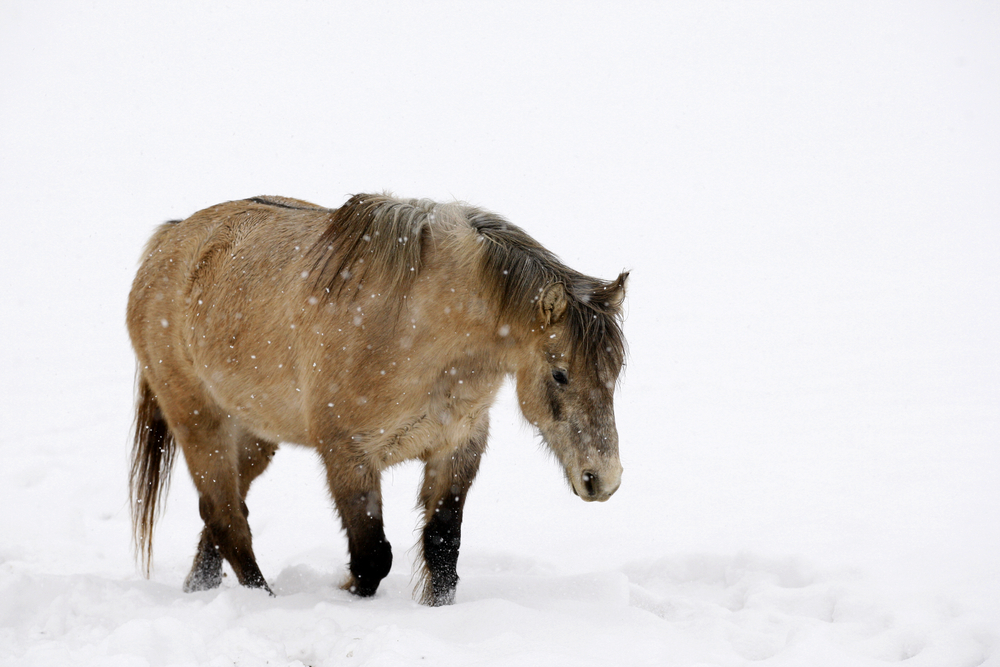 During the Big Freeze of 1963/4 supplementary feeding of the free-roaming New Forest ponies was needed.