Posted on November 27, 2013 by newforestcommoner 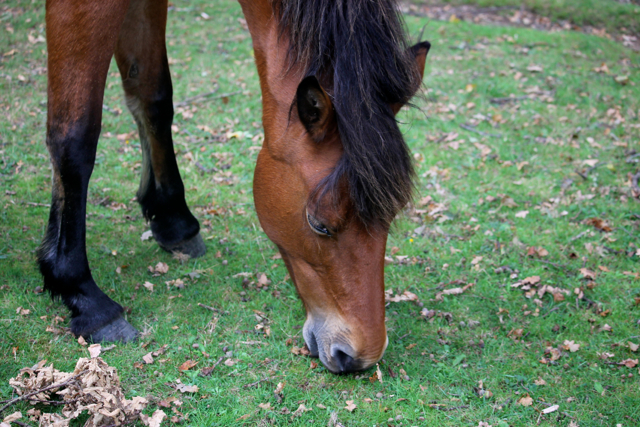 Acorns can be toxic to the commonable livestock but some animals develop a real taste for them.

There’s an often quoted saying that is familiar to commoners: “where you get livestock you get deadstock”. The livestock part is the good part. Tending to your animals, working with them, and, if you’re a breeder, watching the next generation coming into the world, is enormously satisfying. Their lives become our lives. The deadstock part is much harder, particularly when the death of an animal is unexpected and caused by accident or illness. Already this autumn over 60 free-roaming animals have been killed due to the effects of acorn poisoning. Ponies, cattle, and sheep are not able to digest the pyrogallic acid and tannins that occur naturally in acorns. However some animals may develop quite a taste for the fruit of the oak tree and positively feast on them!  The level of toxicity of the acorn seems to differ with the age and species of the oak tree, and the age of the acorn itself. Signs of poisoning include depression, loss of appetite, colic, early constipation followed by bloody diarrhoea and death. Vets can offer no treatment other than charcoal feeds to absorb the toxins, and Epsom salts and liquid paraffin to move things through the gut.

Pannage season
Preventing the ingestion of acorns in the first place is the recommended solution. But whilst this is possible for most horse owners who can stable their horses, rake and remove the acorns or partition-off an offending tree; for commoners who have free-roaming animals over vast territories these remedies are not practical. The traditional solution for the New Forest commoner has been to release pigs, who are tolerant to the acorn toxins, onto the open Forest to eat the offending seeds. Common of Mast is the right, held by some commoners, to turn pigs on to the Forest during Pannage Season. In days gone by Pannage dates were fixed from 25th September to the 22nd November each year. However, if the acorns fell later in the season the pigs would often go in search of food and invade people’s gardens! (Garden fencing that keeps out ponies and cattle is not always adequate for a hungry hog!) The New Forest Act of 1964 made it possible for the Forestry Commission, after consultation with the Verderers of the New Forest, to fix the dates for any suitable term of not less than sixty days. In response to the recent spate of poisonings the Pannage dates, which began in early September, have been extended until Sunday 15th December.

Mast year
Due to the exceptional weather conditions earlier this year the acorn crop is much more abundant than usual. This phenomenon is known as a ‘Mast Year’. Mast is a term derived from the Anglo-Saxon word ‘mæst’, which refers to the large quantities of various kinds of nuts and seeds on the forest floor. This year the heavily laden oak trees have been assailed by high winds, which have caused their acorns to fall in great quantities. There have just been too few pigs to hoover up such large numbers of acorns. Hence the extended Pannage season. Mast Year’s are good news for the trees, however. The more fruit they bear the better the chances they have of reproducing. Acorns also have their fans among the superstitious. According to legend Thor, the ancient Norse god of thunder, once took shelter from a particularly heavy rainstorm under the canopy of a mighty oak tree. To show his gratitude he protected it from ever being struck by lightening. This is why you will notice in some historic buildings the image of an acorn in the window etching or stained glass window. As it was believed than an acorn on your windowsill protected your house from lightening!

Pannage season is an ancient practice for commoners with the Right of Mast.