New Forest: autumn is here and the drifts are underway

Posted on August 31, 2015 by newforestcommoner

The pony drifts are an important activity within the traditional working Forest.

Autumn has arrived. The heathland, woods and lawns wear a pale blanket of mist in the early mornings and the heathland is mantled in purple heather. The blackberries shine like jewels in the hedgerows and great quantities of sloes decorate the blackthorn trees. This is a busy season for the commoners, as they conduct the traditional business of the Forest. The annual pony drifts are now in progress, which is when the ‘wild’ New Forest ponies are rounded up for inspection and processing. Each week, from August to November, several drifts will be held to cover different areas of the Forest. In each area commoners mounted on horses and ponies round up the wild herds and drive them towards a holding area, known as a pound. Once in the pound the ponies can be health-checked, wormed, fitted with fluorescent collars, branded, collected or released back onto the Open Forest. The Agisters, who are employed by the Verderers of the New Forest to help the commoners maintain their stock, are very conspicuous during this time. It is the Agisters who direct the drifts, organise the riders and give instructions to the commoners on the ground. Their aim is to collect as many ponies, and their foals, as possible into the pounds.

Health & Safety
The welfare and safety of all participants, whether mounted or on foot, is of paramount concern during these round ups. Signs are erected in the areas where the drifts are taking place to make other Forest users aware of what is happening. Tourists are asked to stay away, as this activity is undertaken as part of the traditional working Forest and is not suitable for entertainment purposes. Herds of wild ponies galloping across the Forest can be unpredictable. Although it is a coordinated activity it is not without risk, which is why only experienced commoners and horse-owners are invited to assist with the drifts. Many of the riders on the drifts now wear body-protectors, which lessen the risk of injury to their necks and backs, should an accident occur. The Agisters, who are expert horsemen, also take added precautions and wear the new style air vests that inflate if the rider is disconnected from the saddle. Once upon a time, of course, and in the not too distant past the commoners on the drifts would not even have worn riding hats! The horses and ponies ridden during the drifts also have to be up to the job to cover the ground quickly and safely. Forest ponies are ideal for this task and their additional insider knowledge of the terrain and behaviour of their herd-mates has given many of them the epithet of ‘poacher turned gamekeeper’. 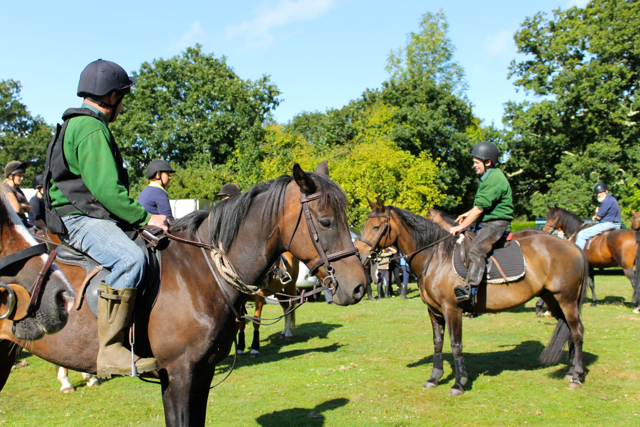 The mounted commoners receive their instructions from an Agisiter about the direction of the drift.