Posted on August 27, 2017 by newforestcommoner

Traditional management practices, particularly commoning, have sustained the ecology and environmental diversity of the New Forest.

Without a doubt, the free-roaming animals of the New Forest are an asset to the local economy and, as ‘architects of the Forest’, are one of the most important bio-forces that sustain the ecology and environmental constituency of the landscape. Commoners’ animals – ponies, cattle, and pigs – have been grazing the heathland, lawns and woods since ancient times. Their grazing and browsing habits have influenced the growth and management of one of the other major assets to the New Forest – its trees. The New Forest boasts many varieties of tree, some native species, such as oak, ash, beech and silver birch, as well as some introduced species, which include cedar, elm and sweet chestnut.[1] Many of these trees will have been quietly growing in their Forest home during some of the most formative events in our country’s history. The Knightwood Oak, for example, is one the most senior of the New Forest’s trees, and is believed to have been a mere sapling when Henry VIII and his court visited the Forest to hunt its deer. Indeed, once upon a time the Forest’s trees were robustly preserved as food and shelter for the king’s deer; then economic and political attitudes changed markedly and trees began to be seen as a resource to fuel industry, manufacturing and commerce. It now begs the question; what value do we place on trees today?

Valued asset or political expedient?
Our attitude and treatment of trees is a reflection of our wider outlook on the natural world, but this mind-set is not always to the credit of our species. A case in point is the policy of wholesale felling that has been adopted in Sheffield, through which thousands of trees have been cut down. This has been a disturbing development; more so, because the policy has been implemented in spite of convincing evidence supporting the preservation of the trees, and for being executed in the face of tremendous local and national opposition.[2] Some of these mature, but healthy, trees marked boundaries of old field-edges or were local landmarks, and some were even planted as memorials to those who gave their lives in both World Wars. However, Sheffield’s local authority has decided it is cheaper to remove the trees than to maintain them. More recently, a road-widening scheme could see Royal Horticultural Society (RHS) Wisley lose 500 trees, including one planted by the Queen to mark her silver jubilee, to make way for ‘major improvements at the junction of the M25 and A3 in Surrey’. [3] The planned loss of trees, in order to accommodate infrastructure projects or to balance Council budgets, is an alarming precedent, which has troubling implications for those involved in preserving and managing the natural and cultural assets of our landscape. I am reminded of the English proverb, ‘He that plants trees loves others besides himself’. If planting trees is a benevolent act that will be enjoyed by others, what does it say about those who want to remove them? As I walk through the woods and glades of the New Forest, to check on my stock, I am thankful to all the Forest folk from previous generations who have left such a leafy legacy across this ancient landscape for the benefit of my animals and me. However, I am also wary of the need to be vigilant just in case the values of the Forest’s natural and cultural assets are replaced by a more profit-driven or politically expedient agenda. 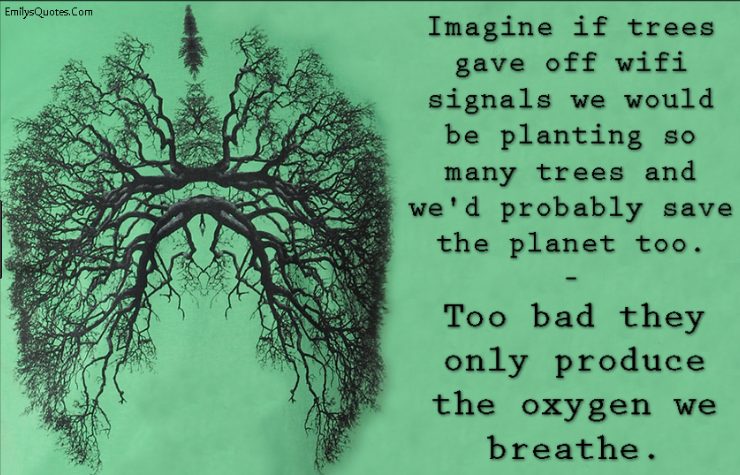 If trees gave off Wi-Fi we’d be planting more.