New Forest: signs of the times

Posted on September 11, 2016 by newforestcommoner

Signage, alerting people that a drift is taking place, is displayed in the area of the pony round up.

As my regular readers will know, the drift season has started. The season runs from August until November and entails rounding up the ponies across the New Forest in a series of drifts that take place in approximately 40 locations. It is an important activity in the commoner’s calendar and involves driving the free-roaming ponies into pounds in a specific area where they can be given wormers or fitted with florescent collars and tail-marked by an Agister if they are staying on the Forest for the winter; or they can be loaded onto trailers and removed to the commoner’s holding if they are to be kept in for the winter or sold on. Although this is an annual activity, the season’s drifts still require a considerable amount of up-to-date planning and preparation to ensure that they run smoothly. One of the important pre-event tasks is to place signage in prominent locations, which inform Forest users in the area that a drift is in progress. This is done to prevent people from becoming unwittingly caught up in the drifts and causing unnecessary risks to themselves, the riders participating in the round ups and, of course, the ponies. To reduce this hazard further, the car parks in the vicinity of the drifts are closed while the round up is in progress. The gates are locked and signs are displayed explaining why the car park is inaccessible.

Signs of the times
On a recent drift I noticed one Forest user who decided that, round up or not, they were determined to park their vehicle at a particular car park in the area. They had left their car in the middle of the car park entrance with the bonnet pointing towards the sign pinned to the locked gate, which clearly explained that a drift, being a necessary part of the stock control activities of the Forest, was in progress and apologising for any inconvenience. Either the sign was not noticed or it was completely ignored because the vehicle had simply been abandoned by its driver. After the drift had finished and all the ponies were safely in the pound, I made my farewells to the Agisters and my fellow commoners and left. As I passed the car park I’d seen earlier in the day,  there in the middle of the gravel track at the entrance was the same motor vehicle but this time it was facing an open gateway and a completely empty car park. The drift being over meant that the car parks were now reopened and the gates had all been unlocked. In this instance, however, there were frustrated drivers trying to access the car park but were being blocked by a lone vehicle. I can only imagine the seething resentment of the drivers wanting to park up and go for a pleasant walk only to be thwarted by the actions of this determined parker. It was one of those occasions when I wished I’d had a camera with me just to record the looks of incredulity on people’s faces! 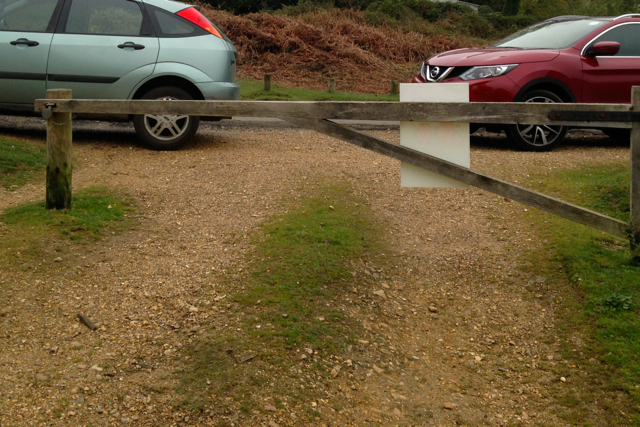 Many New Forest organisations strive each year to educate visitors about the inconveniences and dangers of illegal and careless parking.