Posted on December 28, 2013 by newforestcommoner 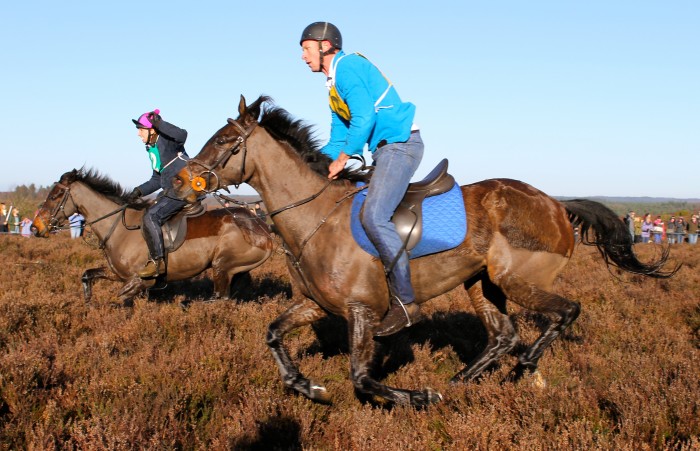 Several races are held at the fixture, including children’s, women’s and veteran’s classes.

Boxing Day was a fine sunny morning as we set off for Wilverley (December 2013). Excellent conditions for racing! The New Forest Point-to-Point is promoted as being the only authentic race of its kind in the country, as it is run according to the principals that founded the sport in the 18th century. The sport was originated by hunting men who raced their hunters from church steeple to church steeple, hence the term ‘steeple chasing’, or point to point. The race was run over natural terrain and included obstacles such as ditches or hedges. As the sport became more popular it became increasingly sophisticated, with professionally trained thoroughbreds replacing the hunter. Managed courses replaced natural terrain and obstacles. By the 19th century the sport had spread but was increasingly moving towards professional level and beyond the reach of the sporting amateur.

Traditional amateur race
The New Forest Point-to-Point, however, has retained the traditional amateur spirit of the race. The finishing-point is announced two weeks prior to the event but the starting-point is kept secret until the day before the race. The riders can choose their own course, from the start-point to the finish point, and can begin the race in any direction. Obviously knowledge and experience of the likely terrain is a huge advantage. It helps to be an excellent rider too! All competitors must have been riding for at least two years and their ponies should have been hunted or colt hunted (i.e. been ridden at the Drifts). The races are open only to New Forest ponies, although there are separate races for part-bred New Forest ponies. The point-to-point is an excellent demonstration of the New Forest pony’s all-round abilities and sure footedness. It is also an opportunity for commoners to gather together and cheer on their favourites. (No bookmakers are allowed so cheering really is the best way to indicate the race favourite). The spectators rely upon the commentator, using the public-address system, to inform them of the start of each race and the progress of the runners and riders, as for most of the time they are out of sight.

Popular Boxing Day fixture
Hundreds of people attend the event to see the runners and riders attempt the course across the Open Forest and the atmosphere is electric as they come into view. The jubilant cries of the supporters (and even the riders), as they cross the finish line is uplifting. The sound of hooves thundering past and the atmosphere in the crowd are equal to that of any Derby! There were even a couple of ‘neck and neck’ finishes that had everyone animatedly cheering them on. Attending the New Forest Point-to-Point was a great way to draw my first season of commoning to an end. I had an opportunity to meet up with other commoners, admire the ponies and the tenacity of their riders and spectate at a traditional Forest event. The weather was beautiful and the views from Wilverley across the Forest were spectacular in the bright December sunshine. I’m looking forward to the next year and my continuing journey from a novice to established commoner. You never know it might even include entry into the New Forest Point-to-Point 2014! 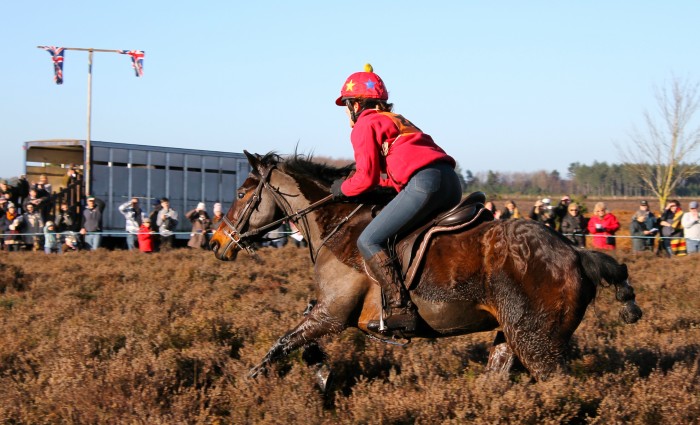 Riders are cheered across the finish line by their supporters and other racegoers.

To get a riders vantage point of the race, via helmet-cam, watch the following You Tube video: http://www.youtube.com/watch?v=OtGFxiJMYxs